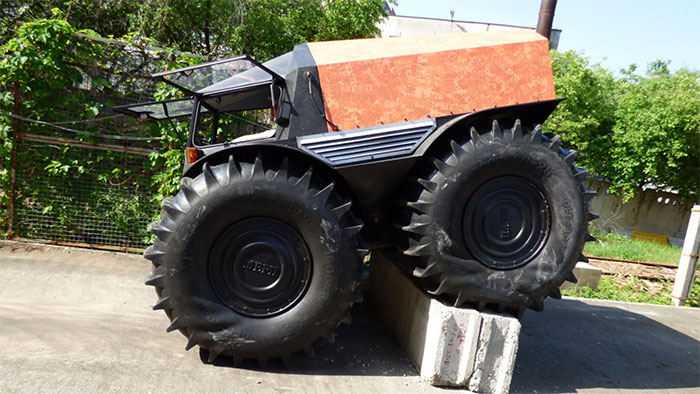 The Sherp is an odd little ATV that looks like some sort of child’s toy with massive tires. Those gigantic tires are self-inflating and allow the Sherp to reach speeds of 6 km/h on water. Yep, this thing actually floats. On land, it can reach a top speed of 45km/h thanks to a 1.5L four-cylinder Kubota turbo diesel engine.

That engine makes a scant 44hp, but that is enough grunt combined with the big tires to let the Sherp crawl over obstacles up to 70cm high. Since the tires are so large, the steering system is a skid steer system along the lines of a tank.

That steering system allows the Sherp to completely turn around in its own body length. That means zero turning radius like a lawn mower. Sherp weighs in at 1300kg and while it’s very simple it’s not a cheap little ATV. A basic version of the Sherp will cost around $65,000 with a higher end version with a hard top and transformable interior costing around $70,000. I’d certainly like to give the Sherp a go, being able to climb all obstacles and swim across water would be a blast.