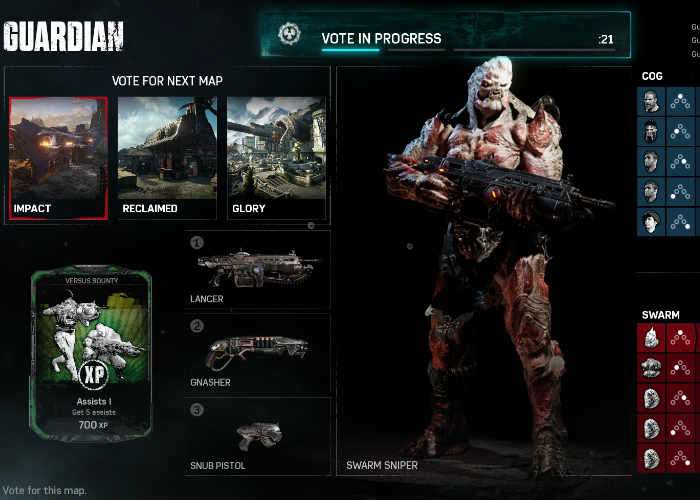 Gears of War 4 Versus players patiently waiting for the arrival of Seasons will be pleased to know that Season 0 has shifted to Season 1 for Ranked Play and the full rundown on what to expect from Seasons moving forward has now been released.

Seasons have arrived in Gears of War 4, Season 0 has shifted to Season 1 for Ranked Play and we have the full rundown on what to expect from Seasons moving forward.

Seasons are a roughly three-month period of Ranked Play where you will be challenged to go out, secure your first Rank through placement matches, and then rise through the Tiers by consistently winning matches. As of right now, resets have occurred on all tiers. You will need to replay your Placement Matches for your new Tier.

Running Seasons allows us to offer better Skill Based Matchmaking by refreshing Ranked Matchmaking every three months, and provide a great way to showcase your skills against an increasingly experienced player base. Season 1 is live now and ends in mid-July! The Season switchover rolls out over time today, which could take up to 8 hours. You may not see the Season change reflected instantaneously.

With great placements come great rewards. Beginning with Season 1, three new full Weapon Skin collections are up for grabs themed to each of the top 3 Ranks – Gold, Onyx and Diamond.

Each type of Weapon Skin is linked to a specific playlist every Season and the reward you receive will be themed to your placement on a per playlist basis. When the Season finishes, the available Weapon Skin types will rotate throughout the playlists. Players who master multiple playlists will be the first to finish building their weapon skin sets!

Rewards are based on your highest Rank during the Season, rather than your final placement. If you get to Diamond and then have a run of losses that brings you down to Onyx, don’t worry – you’ve secured your Diamond Reward for that playlist. We are also planning to award players the Weapon Skins from Ranks below your placement too!

For more information on the new Seasons Of Gears of War 4 Versus jump over to the official website for details by following the link below.