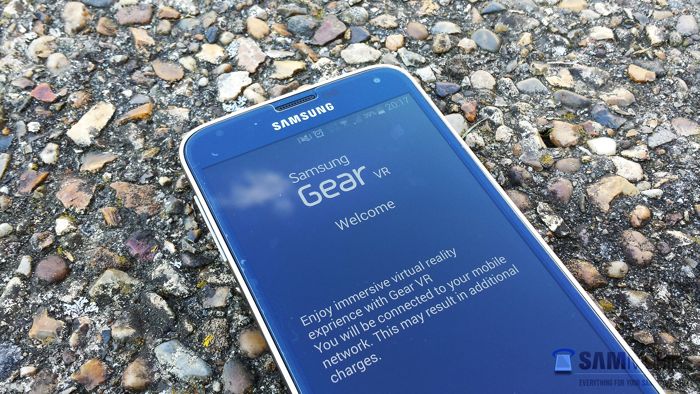 We previously heard that Samsung’s attempt at virtual reality will be called the Samsung Gear VR, Samsung have yet to make the device official, although the guys over at Sammobile have managed to get their hands on a Samsung Gear VR manager app.

The app has confirmed the existence of the Samsung Gear VR device, and it also gives us some more information on some of the features on the app and the device.

Once the user launches the Gear VR setup wizard, they are greeted with a welcome screen. After proceeding, they are required to accept an End User License Agreement, after which the setup wizard starts downloading all the core apps from Samsung’s servers, which include VR Panorama, VR Cinema and HMT Manager (Early Gear VR Manager). Finally, the setup wizard thanks the user for completing the setup process and asks the user to mount their Gear VR and enjoy an immersive virtual reality experience. The final screen also confirms our report on Samsung developing a modular design for the Gear VR, which allows the user to dock in a Galaxy device into the Gear VR using USB 3.0.

Head on over to Sammobile at the link below, for lots more photos and details on what they found out about the new Samsung Gear VR headset. As yet there are no details on when Samsung will launch their new VR device, although we suspect it could appear at IFA 2014 in September.