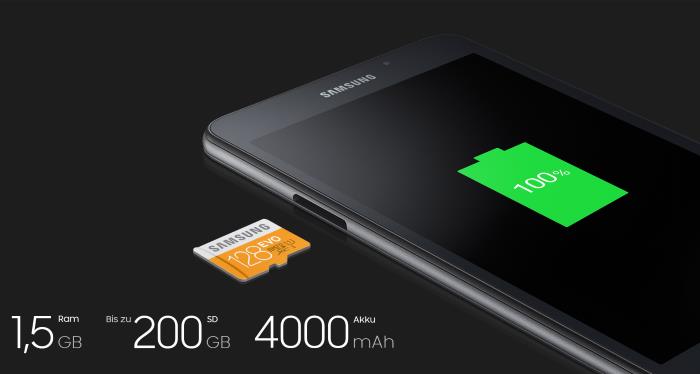 Over the past few days, we’ve heard about the budget-friendly Samsung Galaxy Tab A (2016), expected to launch in the US as the Galaxy Tab E.

Samsung has quietly listed the new Galaxy Tab A (2016) on their website, listing all the features the tablet will come with.

At the moment, the tablet is listed with most of the specifications on Samsung’s Germany website, and will launch as Galaxy Tab A (2016) in Europe.

As for the specifications, the tablet comes with a 7-inch display sporting a resolution of 1280 by 800 pixels resolution. There’s a 1.3GHz quad-core processor paired with 1.5GB of RAM, 8GB of internal storage and a microSD card slot for expansion. Other features includes a 5MP camera for photos and videos, 2MP front-facing camera, a 4,000 mAh battery and ships with Android 5.1 Lollipop as its operating system out of the box. As it can be seen, it’s a budget-friendly tablet offering entry-level specifications so it shouldn’t cost too much once its available for sale — the tablet is listed on some retailers for €169.

We’re expecting the company to make an official announcement about the availability of the tablet. We’ll update you as soon as it happens.