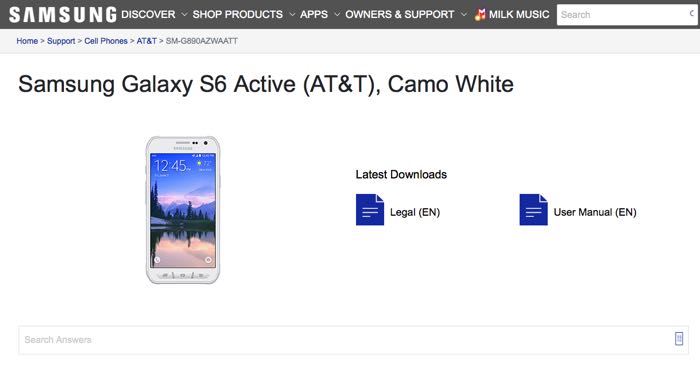 We have been hearing rumors about the new Samsung Galaxy S6 Active over the last few week and now Samsung has briefly listed the handset on their website.

The listing for the Samsung Galaxy S6 Active has now been pulled from Samsung’s site, before it was pulled it showed the full specifications for the device.

The handset comes with 3GB of RAM and 32GB of built in storage, there is no microSD card slot, so 32GB will be the maximum storage on the device, unless a larger storage option is offered.

The Galaxy S6 Active is equipped with front and rear facing cameras, the front camera is a 5 megapixel model and the rear camera is a 16 megapixel version  with auto focus and a flash, this camera is capable of 4K video, the device also comes with a 2550 mAh battery.

We suspect that we will get some sort of offical announcement from Samsung on the launch of the handset shortly, you can see the cached page which has now been removed from Samsung’s website at the link below.

Thanks John for the tip!