Samsung unveiled their flagship phablet, Samsung Galaxy Note 3, earlier this month in Berlin. Now, images of the dual-SIM version of Samsung Galaxy Note 3 with a model number SM-N9002 has been leaked with details about its hardware – most of which we already know. Interestingly, Samsung Galaxy Note 3 DUOS will be powered by Snapdragon 800 SoC with a clock speed of 2.3GHz, the same chip that is packed came the LTE version of the phablet. Other markets are expected to get the Exynos 5 Octa version. 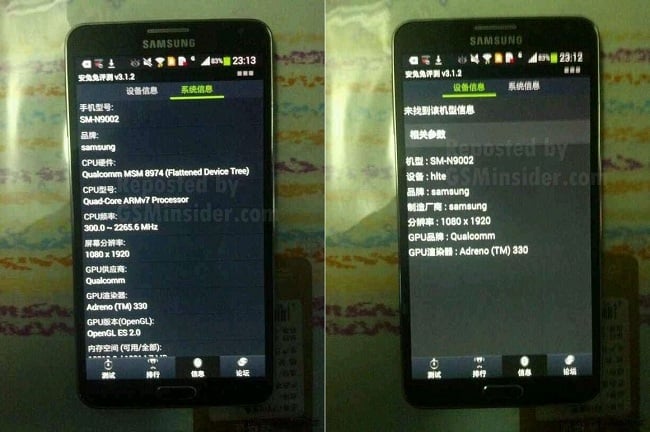 Earlier rumors pointed out that the dual-SIM model, expected to launch in Asian markets especially China will be powered by Exynos 5 Octa chips, but it turns out the rumor was incorrect. The photos also show AnTuTu benchmark results where the device scored an impressive 31,276. But that’s not the interesting part. 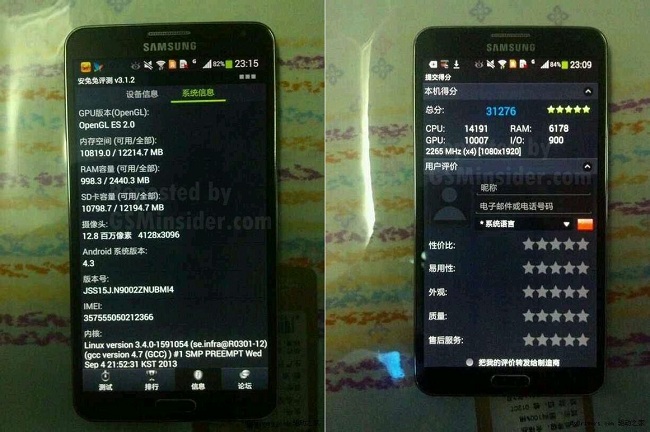 It seems as if the specifications of the dual-SIM version are a little different from the original version. Based on the screenshots, the dual-SIM version comes with 2.5GB RAM and 16GB internal storage. While we have seen at the launch event that the device packs 3GB RAM with 32GB internal storage and a microSD card slot, it could be the prototype unit so there is a chance that Samsung decided to change it to 3GB in the retail unit. Or it could be the available RAM available to use, while the remaining is used by the system. Other than this, the device appears to have the same physical appearance as the one launched earlier this month.