Samsung has launched an update version of the Galaxy Core, the Samsung Galaxy Core Plus, the handset is now available in Taiwan, and it comes with some updated hardware over the original device.

The Samsung Galaxy Core Plus comes with a 4.3 inch WVGA display that has a resolution of 800 x 480 pixels, the device features a dual core 1.2GHz processor and 768MB of RAM, the original Galaxy Core had 1GB of RAM. 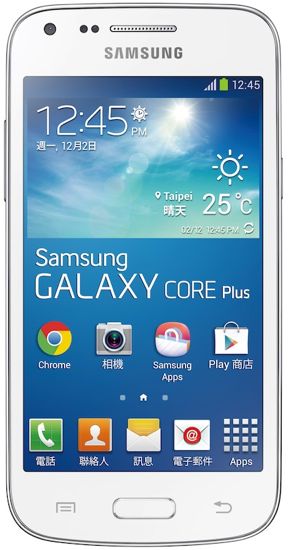 Other specifications on the Galaxy Core Plus include Android 4.2 Jelly Bean and 4GB of built in storage, should you need additional storage, the handset has a microSD card slot that can take up to 64GB microSD cards.

The Galaxy Core Plus comes with a 5 megapixel camera, it also comes with NFC and Samsung’s S Beam, the device supports GSM 850/900/1800/1900 MHz bands, WCDMA dual band and HSPA+

The handset will retail for 7,990 TWD which works out at around $270 US dollars, this is the unlocked price for the handset in Taiwan without a contract with a mobile carrier.

There are no details as yet on whether Samsung intends to launch the Samsung Galaxy Core Plus in other countries, as soon as we get some more information, we will let you guys know.