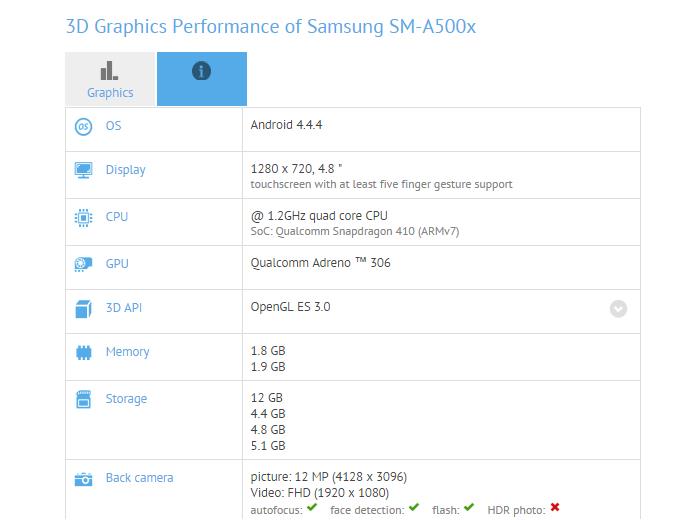 Samsung Galaxy Alpha brings a different design direction compared to previous smartphones from the Korean OEM. Rumors suggest Samsung is working on a new “A” series handsets, including Galaxy A3,A5 and A7, some of which we saw in all their glory yesterday.

Recently, the alleged Samsung Galaxy A5 with model number SM-A500x was spotted on GFXBench, revealing what we can expect from the handset.

Most of the specifications appears to be the same as we’ve heard before, with a few changes here and there. There’s a 4.8-inch display sporting a resolution of 1280 by 720 pixels, with a quad-core Snapdragon 410 chipset and Adreno 306 GPU — that’s a 64-bit processor from Qualcomm.

There’s 2GB of RAM and 16GB of internal storage, with a 12MP camera for photos and videos, 5MP front-facing camera, and runs Android 4.4.4 Kitkat as its operating system out of the box.

There’s no word about the launch of the new handsets, but they should launch in the next few weeks. Samsung Galaxy A5 has already passed through the FCC, which is usually one of the last stops before the handset hits retail.

We’ll update you as soon as we get more information about its launch and availability.