It should be pretty obvious by now that Apple is planning to launch a low-cost iPhone 5C. We saw the device in some leaked photos, showing us the externals of the device in various colors. If you still have doubts, a new image has surfaced on the internet that shows a number of iPhone 5C variants in Pegatron facility. 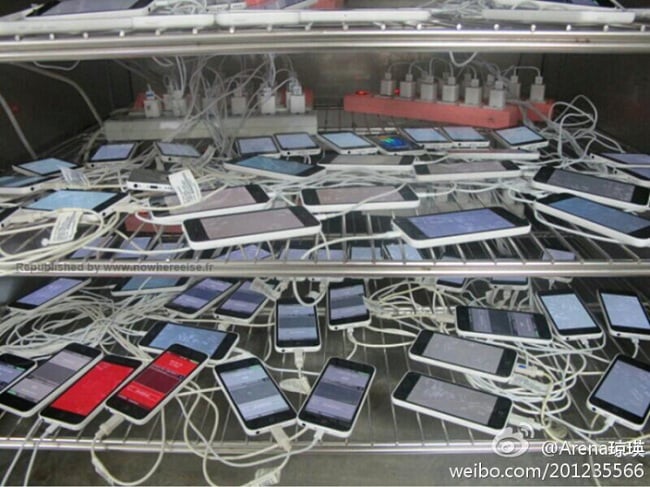 A new image emerged from Sina Weibo that shows a number of handsets being tested before the final production. The image only shows us the alleged device in white color; however, the new iPhone 5C will be available in an array of colors including red, yellow, green and blue.

The picture was allegedly posted by a Pegatron employee – that seems to be down now – along with a caption that says,

The low-end iPhone 5C to be launched for Chinese consumers in September doesn’t look much different than theXiaomi Phone 2, right?

The setup seems odd but the folks at Engadget note that they have seen this setup during factory tours before. They say that visitors are not allowed to capture photographs in the production line, and still wondering how a shot of came out from a well-guarded environment.

The analysts suggest that the alleged iPhone 5C will completely replace iPhone 5 as it will feature same specifications with a plastic exterior. Apple is expected to schedule an event on September 10 where the company plans to launch both iPhone 5S and iPhone 5C. The devices are expected to hit the shelves by September 20.

Let’s just take this as another leaked rumor, and wait for an official word from the Cupertino giant. We are just a few weeks away from September 10, and we will find out how much truth lies in all these rumors.