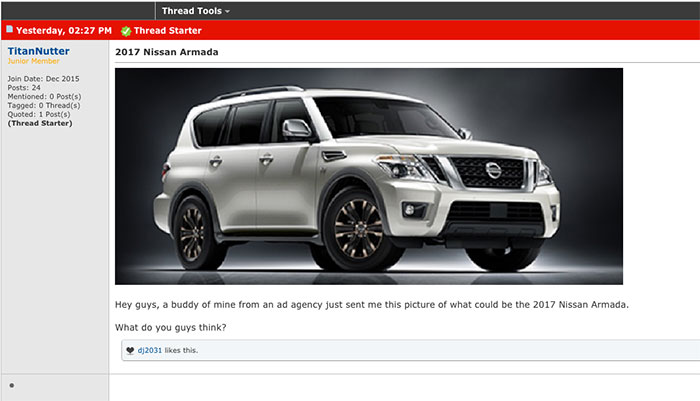 In the States, the full-size Nissan SUV that has been available since Nissan has offered a full-size SUV is the Armada. The current Armada rides on the exact same platform as the Nissan Titan truck. Outside the US, Nissan has offered another SUV called the Patrol for a long while. That Patrol is essentially the same car as the Infiniti QX80.

A new rumor making the rounds claims that the next Armada will be a rebadged Patrol. The claims come from someone on a forum who says a friend at an ad agency sent over the image you see here. That is supposed to be the 2017 Armada.

This might be good news, the Infiniti QX80 isn’t based on the Titan, it’s on its own platform. That would mean a better ride and more luxurious appointments. The only power plant is tipped to be the Nissan 5.6L V8 making about 400hp. Fuel economy won’t be great at somewhere in the 14mpg range in the city. Pricing for the 2017 Armada is pegged at $39,000 for starters. I was rather hoping the next Armada would have the 5.0L Cummins as an option.