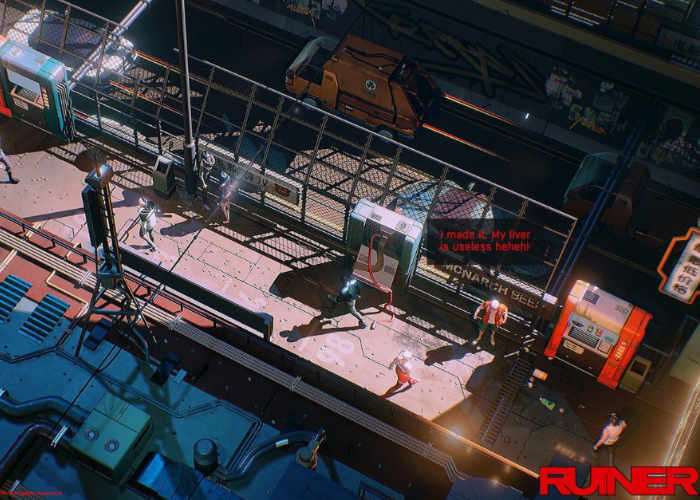 Magdalena Tomkowicz from Reikon Games has taken to the official PlayStation blog this week to announce the upcoming launch of a new PlayStation 4 tutor in the form of Ruiner.

Previously released on PC via Steam the brutal action shooter is set in the year 2091 in the cyber metropolis Rengkok. Check out the announcement trailer originally released the game to learn more about it storyline.

Ruiner will drag you through the darkest, shadiest, deadliest corners of the rapidly growing, brilliant metropolis of Rengkok City. From the shiny corridors of Heaven’s corporate interiors, through the city’s lowest districts — even into the underground imagination farms.

Let’s start with melee. You can stick to your good old pipe, but if you want something more fancy, go for nano katana or electric sword, or one of the heavy, two-handed super-swords. The two modes of fencing have their own advantages and special attacks. The first, light one lets you stun enemies for a second, a lot of time to finish them. The heavy melee whirlwind AOE attack is not only spectacular but deals massive amounts of damage, too!

Then there are more than 20 guns to choose from. Starting with conventional pieces like pistols, SMGs, shotguns, and plasma rifles, all the way up to hi-tech armaments like the singularity gun, orbital cannon, sonic shotgun, lightning cannon, subzero gun, rail gun, and more. Just wait for the enemies to drop them and try for yourself. Some come with bullets that pierce through multiple enemies, stun them, set them ablaze, disintegrate them, or bounce off walls making the whole battlefield look like an insane dance-floor.

No date has been set for the launch of the game but expect it to roll out sometime during 2017. As soon as more information comes to light will keep you updated as always.