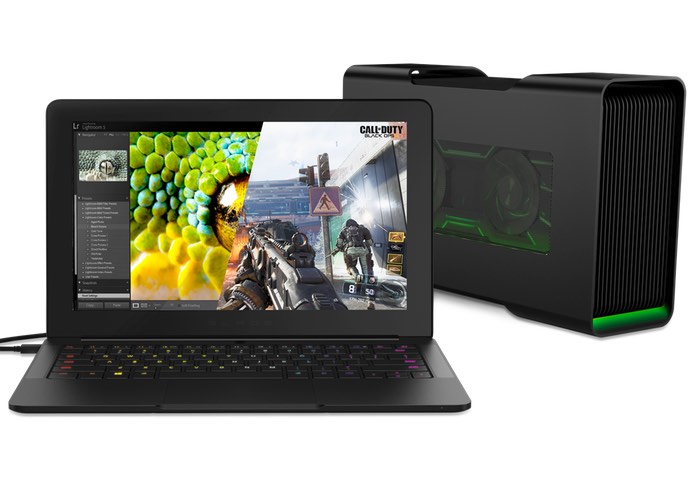 During this years CES 2016 technology show that took place in Las Vegas last week, Razer unveiled its new gaming laptop in the form of the Razer Blade Stealth which can be combined with an external graphics card to provide all the power you would need to play top end gaming titles or carry out video editing.

Now Razer has announced that the Razer Blade Stealth is already available to purchase with prices starting from just $2,000 and shipping expected to start on January 29th.

The Blade StealthGaming laptop features a thin aluminium chassis which encloses an Intel Core i7 processor that has been combined with a 12.5” high-resolution touch display. The IGZO (Indium Gallium Zinc Oxide) displays are available in two versions offering either Ultra HD at 3840 x 2160 pixels and Quad HD at 2560 x 1440 pixels.

The system can be connected to the Razer Core external graphics card via a Thunderbolt 3 connection and offers 100% Adobe RGB support. Razer explains more about its new Razer Core technology :

The Thunderbolt 3 technology in Razer Blade Stealth brings Thunderbolt to USB-C at speeds up to 40 Gbps, creating one compact port that does it all. With the ability to connect to USB, Display Port, PCI Express, and Thunderbolt devices it is the most versatile connection available. A single cable now provides four times the data and twice the video bandwidth of any other cable, all while also supplying power to the notebook. Whether you’re gaming or editing 4K video with plug and play external desktop graphics, you can now transform the Blade Stealth into a true desktop experience.

With the Razer Blade Stealth’s extremely thin and light design, you’d never guess it holds all that power. The 6th Gen Intel Core i7-6500U processor gives the Razer Blade Stealth 2.5GHz of processing power and Turbo Boost speeds up to 3.1GHz. Push even more pixels with the Intel HD Graphics 520 for smooth visuals. The Razer Blade Stealth also packs up to 512GB of PCIe solid-state storage and 8GB of fast dual-channel memory, allowing you to boot quicker and launch applications faster than ever before.

For more information on the new Razer Blade Stealth jump over to the official Razer website for full specification is and the ability to order with shipping expected before the end of the month.