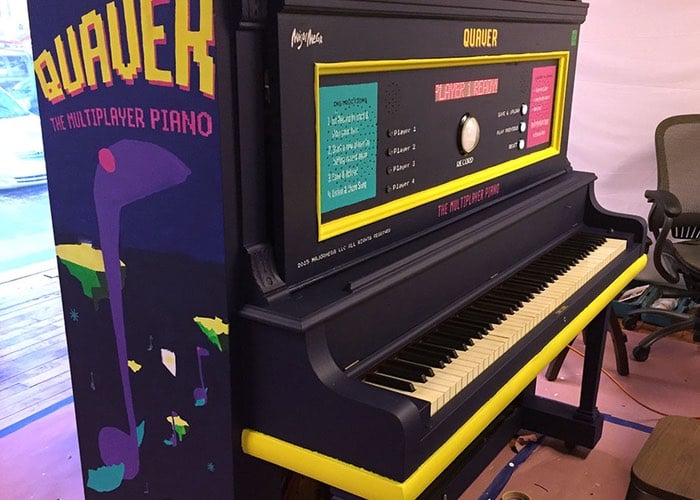 A Raspberry Pi mini PC has been used to transform an upright piano into the Quaver, that takes the form of an analogue looping piano.

The retro looping piano has been created by two musicians based in Lancaster, Pennsylvania, who have used their making skills to equip the Quaver two record, save and loop uploaded music and functions a little like a four track recorder.

Check out a demonstration of the Raspberry Pi powered piano loop player in the video below. The Hack-a-Day website comments further on the design and functionality of the awesome Pi powered Quaver.

The player sits down, cracks their knuckles, and presses our personal favorite part of the interface: the giant, irresistible record button. A friendly scrolling LED matrix display tells them to start playing. Once they are satisfied, they press the button again to stop the recording, and the notes they played immediately play back in a loop through a pair of salvaged Bose speakers from the 1980s. This is just the beginning of the fun as you play along with your looping recording, building up several voices worth of song!

The development of Quaver was not without its problems. Pianos are difficult to mic in any environment, especially the echo-prone food court of your average shopping mall. Because a piano’s soundboard is so large, the sound is never focused in any one place. An electronic engineer named [Ezra Charles Helpinstill] created electromagnetic bar pickups in the early 1970s, and named them after himself. They quickly became the amplifying device of choice for piano stars like [Elton John]. Helpinstill pickups attach to the piano soundboard with magnets and clamps. They only sense vibration, so there is no need to worry about feedback.