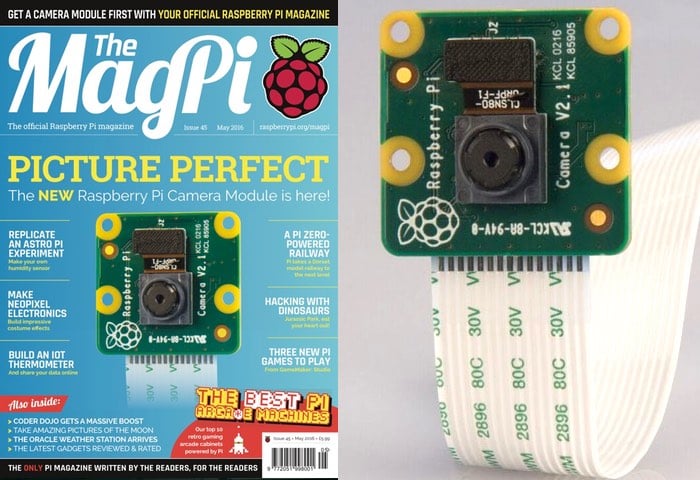 Issue 45 of the official Raspberry Pi magazine otherwise known as The MagPi has been released this week and brings with it more details on the new Raspberry Pi camera which takes the form of the second generation of high camera modules and is equipped with an 8 megapixel sensor.

If you enjoy building things using the Raspberry Pi mini PC then the The MagPi magazine is well worth the subscription and each month brings plenty of projects, inspiration, tips and hardware reviews to help you develop your coding skills and Raspberry Pi knowledge.

Issue 45 is out today and provides a number of projects to get you up and running with the new camera module as well as looking at the ten best Pi-powered arcade machines, which should give you some ideas for a retro games system of your own. Highlights from issue 45 include :

– Replicate an Astro Pi experiment
– Create a humidity sensor, similar to the Sweaty Astronaut code
– Hacking with dinosaurs
– The MagPi heads to the Isle of Wight to see how some animatronic dinos are being hacked with Pi
– Original games on the Pi
– Play three brand-new games on your Pi thanks to YoYo and GameMaker Studio
– Moon pictures
– Find out how to use the camera board to take amazing photos of the moon
– And much, much more!

If you found this article interesting you might also be interested in this list of awesome Raspberry Pi Zero projects we have put together. To subscribe to the official Raspberry Pi magazine jump over to the Raspberry Pi Foundation website via the link below.