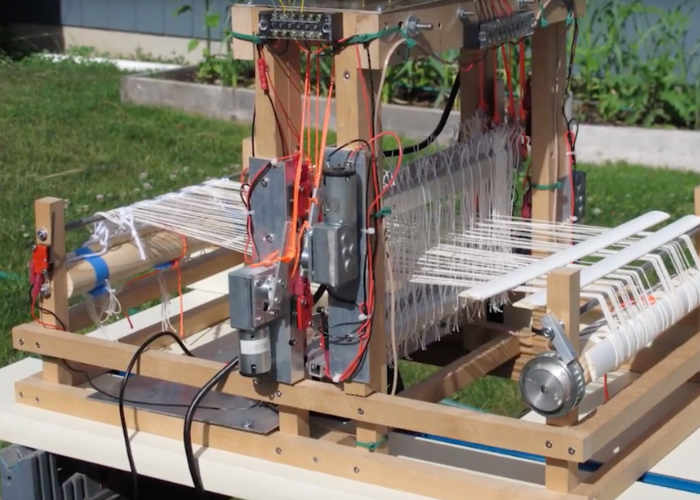 Maker Fred Hoefler has modified a desktop loom to make it fully automated by adding a Raspberry Pi mini PC to aid his wife Gina. Who has been a weaver for 30 years, but began experiencing difficulties with the physical aspects of using her loom as she grew older.

Check out the video below to learn more about the creation of the Raspberry Pi loom and see it in action. If you fancy creating your very own Raspberry Pi powered loom jump over to the websites via the link below for full instructions written by Fred Hoefler.

The Raspberry Pi Foundation explains a little more about the project.

His device is intended to help older weavers who have trouble with the hard work of throwing the shuttle and holding down the pedals. Assistive looms cost upwards of $10,000: Fred’s solution comes in at a tidy $150, factoring in loom, Pi, and some motors from Amazon. So this isn’t for hobbyists like me: this loom can be a way for people whose livelihoods depend on being able to weave to continue working long after they might have had to retire.

To keep the project within reasonable limits the following ground rules were applied to the build.

• build a 4 harness tabletop loom
• control the loom with a Raspberry Pi
• the loom has to be quiet enough carry on a conversation in the same room with it
• the loom needed to be controlled without a lot of fancy software and interfaces.  It must be controlled from a Unix/Linux Bash console.
• the loom had to be controlled directly with a keyboard and monitor plugged into the Pi or indirectly through a wi-fi SSH connection using a stock terminal utility on a PC or Mac.
• the Raspberry Pi must be the most expensive single component of the loom.  No single part of the loom can cost more than $35.