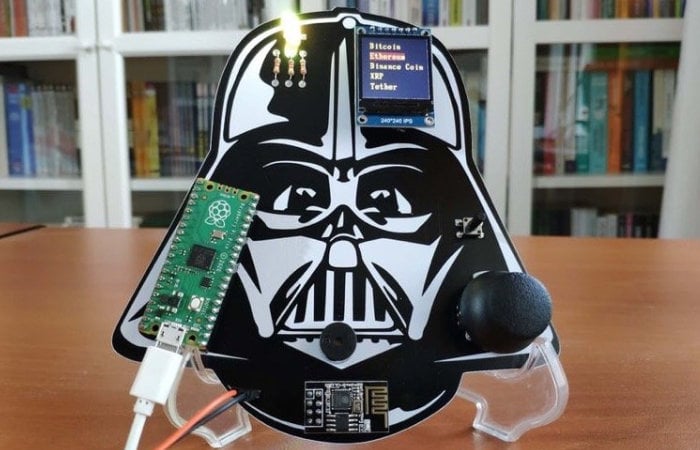 Raspberry Pi enthusiasts may be interested in a new project published to the Hackster.io website this week by member Kutluhan Aktar, providing details on how you can use the Raspberry Pi Pico microcontroller to create a crypto currency price tracker. As you can see from the image Aktar has used a Darth Vader graphic to mount his tracker with great effect.

The project is classed as an advanced build and should take approximately five hours to complete. Aktar explained a little more about the inspiration behind the crypto currency price tracker which updates with the latest prices for Bitcoin, Ethereum, Binance Coin, Ripple (XRP) and Tether.

“Instead of using a mobile or web application, I decided to develop a brand-new device to track and display cryptocurrency data with Raspberry Pi Pico. Since I am a huge Star Wars fan, I thought it would be hilarious and intriguing if the one who brings me news about the balance of the cryptocurrency coins happened to be Darth Vader – the chosen one 🙂 Thus, I designed this apparatus which presents data on these five coins

I decided to use the CoinGecko API V3 because it does not require account credentials or an authentification key. Though it is free, the CoinGecko API provides data in JSON for cryptocurrency coins profusely. After managing to get cryptocurrency data, I developed a web application in PHP, named Cryptocurrency Tracker, running on Raspberry Pi to obtain data from the API, process it, and print a JSON data packet containing these parameters for each requested coin”