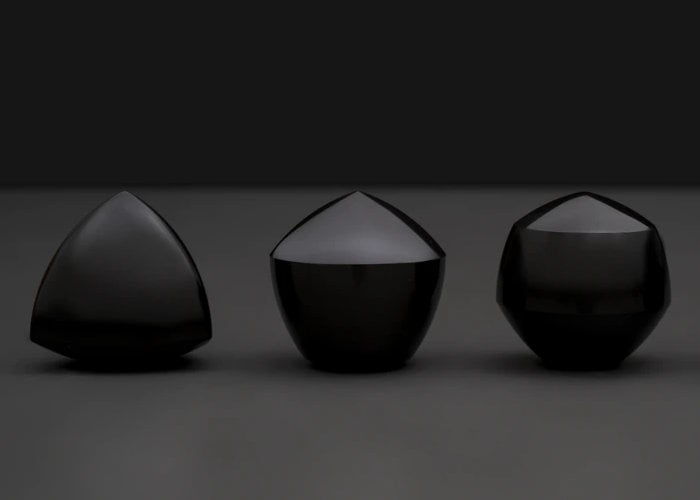 Euler’s precision machined solid orbs are available in Stainless Steel, Copper, brass and Hard Anodised Aluminium, with options to choose from a mirrored, machined or stone finish in any material except Aluminium which is only available in polished black. Even though the forms are not spheres they still act like one and can be rolled in a straight line. Check out the video below to then more about the precision machine solids with a constant width.

Early bird pledges are now available for the interesting project from roughly $26 or £19 (depending on current exchange rates). If the Euler campaign successfully raises its required pledge goal and manufacturing progresses smoothly, worldwide shipping is expected to take place sometime around May 2021. To learn more about the Euler precision machine solids project review the promotional video below.

“An Orbiform can roll like a sphere even though it is not a smooth curve and has edges. Its central mass is not as great as a sphere so it won’t continue rolling unless a force remains on it. Reuleaux triangle also known as orbiform (Fig1.0) when produced in 3D. It is the shape formed at intersection when the centre of 3 circular disks are kept at each point of the triangle with their boundaries in contact with other two.”

“All CNC machined from solid bars, our manufacturers are equipped with a state of art setup imported straight from Germany, Japan and South Korea. Our project is for math enthusiasts, aesthetes, meditators, designers, creators, educators and students. It is pretty much for all smart people. Even if you’re not, you may look like one just by owning a set.”

“With PentaOrbiform (Fig 1.1) replacing Triangle with a Pentagon and using 5 circles, the circles overlaps with two further edges and not the neighbouring edge in this case. Same goes with HeptaOrbiform(Fig 1.2) , heptagon and 7 circles from origin overlapping one neighbouring edge.”

For a complete list of all available campaign pledges, stretch goals, extra media and engineering specifications for the precision machine solids, jump over to the official Euler crowd funding campaign page by checking out the link below.