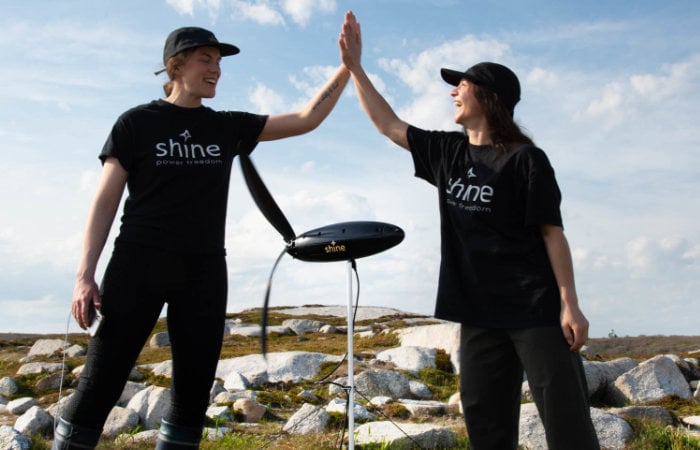 Outdoor adventurers looking for a small wind turbine which is small enough to fit in a backpack, maybe interested in Shine. A new wind turbine launched via the Kickstarter crowdfunding website, which has blasted past its required pledge goal, raising over $150,000 thanks to over 560 backers with still nine days remaining. The Shine wind turbine takes less than five minutes to setup, is completely water resistant and weighs 3lbs and is capable of generating up to 40 W with wind speeds between 8 to 28 mph. “Shine creates energy faster than any other handheld renewable product. It is able to collect three phones’ worth of power in an hour at maximum rated wind speeds.”

“Thank you Kickstarter! We are blown away by the support we got from this campaign and we have officially sold out of all of our Shine Turbine units available for this Kickstarter!”

Early bird pledges are now available for the innovative project from roughly $240 or £324 (depending on current exchange rates), offering a considerable discount of approximately 40%% off the final retail price, while the Kickstarter crowd funding is under way. If the Shine campaign successfully raises its required pledge goal and production progresses smoothly, worldwide shipping is expected to take place sometime around . To learn more about the Shine wind turbine project review the promotional video below.

“Do you use portable power banks that die in a few hours, solar chargers that rarely create usable power or bulky power stations that are hard to pack and heavy to carry? Access to renewable power off-grid is essential as electronics often require more charging power than portable batteries can provide. Without a reliable energy source, you can find yourself in vulnerable situations when your battery supply can’t be replenished.”

“Whether you’re camping, canoeing, RVing, hanging at a cottage, or looking to prepare for an emergency, the Shine Turbine provides renewable power day and night, rain, cloud, or shine. Shine’s patent-pending technology instantly converts wind into power to charge a variety of devices or rapidly stores energy in its internal 12,000 mAh battery for later use. “

For a complete list of all available early bird specials, stretch goals, extra media and detailed specs for the wind turbine, jump over to the official Shine crowd funding campaign page by clicking the link below.