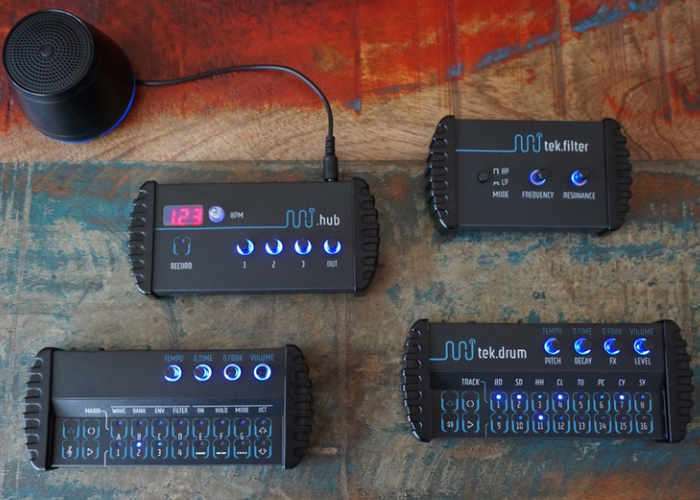 Musicians looking for a compact portable electronic music studio may be interested in minijam, which has been created by Sebastian Heinz placing the United Kingdom.

Developed by the makers of Patchblocks the new mini electronic music studio allows you to create tunes with synthesisers and drum machines, and can be seen in action in the promotional video below

Having only just launched on Kickstarter the team has already raised over £25,000 and a Rover halfway towards their pledge goal thanks to over 200 backers who have already pledged their hard earned cash to help take the project forward.

The development team behind minijam explains a little more about its inspiration and design :

We are taking the idea of a music studio or live performance setup, built entirely out of hardware, and boiled it down to a range of very compact and affordable products. The set includes a drum machine, a wavetable synthesizer, an analog filter, a mixer and a speaker. It gives you the feel and fun of jamming with hardware equipment, all bundled in a ready-to-use set with an impressive sound quality.**

Each device is powered by a rechargeable battery and can be used standalone or as part of the set. You don’t need any software or mobile phone. Our mixer allows you to also integrate other hardware with it’s trigger syncing feature.  What we introduce here is the first set of minijam machines – the “tek” edition. Machines that are specific to this edition have “tek” in their names. Support us and you will see many more editions in the future.

Jump over to Kickstarter via the link below to pledge your support to the campaign.