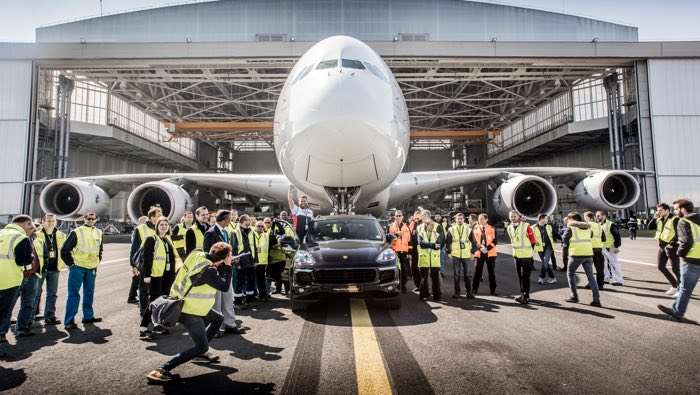 Porsche and Air France have set a new world record, the two companies got together in a Guinness World Record attempt.

A Porsche Cayenne managed to tow one of the world’s largest aircraft, an Air France Airbus A380.

Richard Payne, a technician at Porsche GB: “It did it – I’m so relieved! We don’t usually go this far to test the limits of our cars but I think today we got pretty close. I could tell that it was working hard but the Cayenne didn’t complain and just got on with it. My mirrors were quite full of Airbus, which was interesting. Our cars can go a bit beyond what our customers might expect – they’re designed to be tough. But even so, what the Cayenne did today was remarkable – we drove the car here from London – and I plan to drive it home again, having towed an A380 in between. Credit should go to the team in Stuttgart who developed the car – they did a thorough job. I’m also very grateful to Air France and its engineers for their generosity in allowing me to tow their beautiful aircraft.”

You can find out more details about this new world record from Porsche and Air France over at Porsche at the link below.