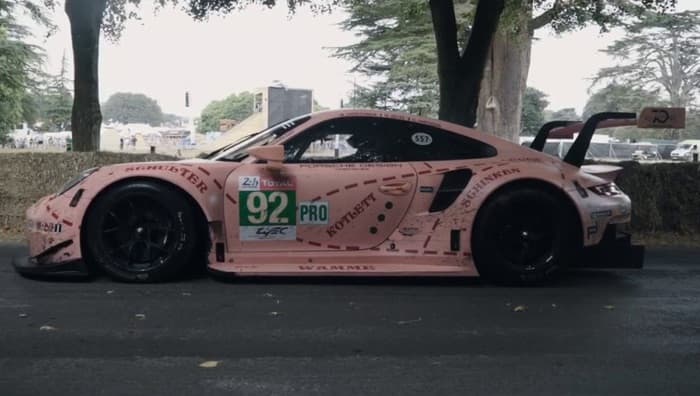 Porsche showed off their Porsche 911 RSR at this years Goodwood festival of speed, this is the car that Porsche used at Le Mans this year.

In the video below we get to see the 911 RSR in action, the car is called  the Pink Pig and it takes its design inspiration from the famous “Pink Pig” design of the 917/20 from 1971.

Still proudly wearing Le Mans battle scars from a thrilling victory, the iconic ‘Pink Pig’ livery was first run on the widebody Porsche 917/20 that took part in the French enduro in 1971. Since then it has gone on to achieve cult status amongst fans of motorsports the world over. Visitors to Goodwood were able to experience the 911 RSR taking on the Hillclimb over the four days of the Festival, and meet the drivers, mechanics and car itself up close.

You can find out more details about the Porsche 91 RSR over at Porsche at the link below.