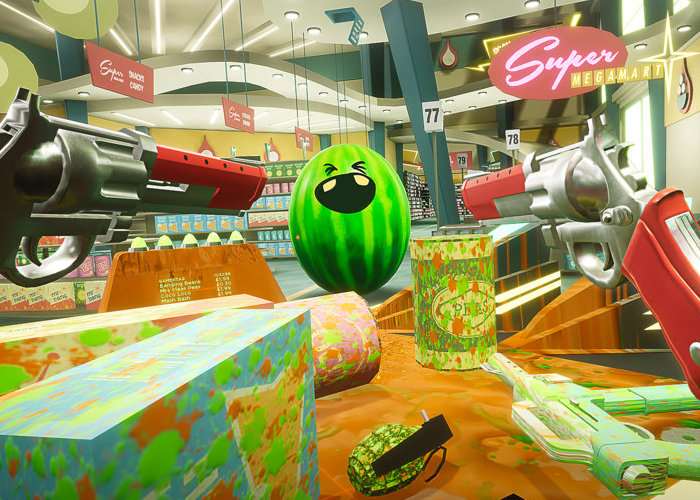 Dan Sheridan from nDreams has taken to the official PlayStation blog to reveal more details about the new PlayStation VR title that will be launching before the end of the year, called Shooty Fruity.

As the name suggests the game provides a virtual reality environment during which players must defend himself against waves of killer produce. Check out the announcement trailer below to learn more about what you can expect from this new virtual reality game.

As the newest employee of Super Megamart, you begin your day only to be set upon by masses of ‘genetically mutated’ fruit. That’s mutated, not modified. Like human-sized melons, rabid oranges, and raspberries that fire artillery at you. It’s all completely under control though. Successfully ‘doing your job’ gives you access to an arsenal of high octane, military-grade weapons that you can use to pulp the ripe plump fruit into little pieces. Juicy… Scan a tin of beans, get a pistol. Scan more tins of beans and you get a high velocity submachine gun along with an exploding ammo power-up.

As you progress through the numerous challenges, striving for promotion in your glowing ‘Career’, you get to do even more shop-themed tasks whilst taking on a whole store of fruit types – including exploding pineapples, kamikaze limes & ninja lemons! Unlock increasingly deadly and fully customisable load outs, to become Super Megamart’s very own human blender (yes, that is an eight-barrel revolver in one of the screenshots).