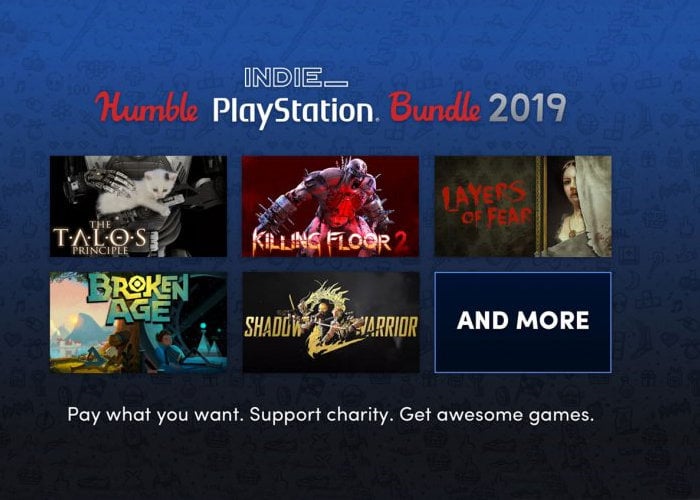 Sony has today announced the availability of the PS4 Humble Indie PlayStation Bundle 2019, which is now available from just one dollar and feature over $239 worth of games, all for PS4 consoles. (SIEA regions only). If you’re not familiar with how Humble Bundles work, you pay what you want for your bundle, with higher tiers unlocking more games.

No matter what price you choose, you can allow the default split of your payment or you can choose where the money goes: between the developers and publishers, Humble Bundle, and/or charity. The following games are included in the PS4 Humble Indie PlayStation Bundle 2019

– Grim Fandango Remastered: This epic story of four years in the life (or death) of Manny Calavera, travel agent to the dead, has been remastered to look, sound, and control even better. Grim Fandango still stands as a classic of the genre, with unforgettable characters and unique combination of film noir and Mexican folklore.
– The Bard’s Tale: Take on the role of the Bard, a sardonic and opportunistic musician and adventurer. You can choose the Bard’s responses toward other characters, and each choice changes the course of events in the game.
– InnerSpace: An exploration flying game set in the Inverse, a world of inside-out planets with no horizons. Soar through ancient skies and abandoned oceans to discover the lost history of this fading realm, where gods still wander.

“Beat the average” price (at least 1¢ more than the current average bundle payment), to also get:

– Layers of Fear: A first-person psychedelic horror game with a heavy focus on story and exploration. Delve deep into the mind of an insane painter and discover the secret of his madness as you walk through a vast and constantly changing Victorian-era mansion.
– Wasteland 2: Director’s Cut – Standard Edition: Deck out your Ranger squad with the most devastating weaponry this side of the fallout zone, test the limits of your strategy skills, and bring justice to the wasteland. The choices are yours, but so are the consequences.
– The Talos Principle: A philosophical first-person puzzle game. Players are tasked with solving a series of increasingly complex puzzles woven into a metaphysical parable about intelligence and meaning in an inevitably doomed world.
– Broken Age: A timeless coming-of-age story of barfing trees and talking spoons. Vella Tartine and Shay Volta are two teenagers in strangely similar situations, but radically different worlds. The player can freely switch between their stories, helping them take control of their own lives and dealing with the unexpected adventures that follow.

Pay $15 or more to get everything above plus:

– Killing Floor 2: The outbreak caused by Horzine Biotech’s failed experiment has quickly spread. Upon tracking specimen clone outbreaks, players will descend into zed-laden hot zones and exterminate them. Killing Floor 2 ramps up the gore with a proprietary, high powered persistent blood system.
– Shadow Warrior 2: Wield a devastating combination of guns, blades, magic and wit to strike down the demonic legions overwhelming the world. Battle alongside allies online in four-player co-op or go it alone in spectacular procedurally-generated landscapes.