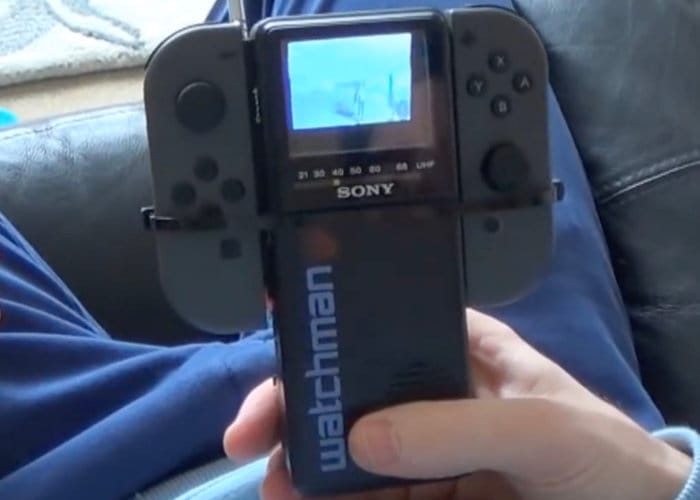 A neat hack has been published this week via YouTube by Vince, which allows Nintendo Switch owners to play their games on a portable pocket sized black-and-white Sony TV. Check out the demonstration video below to see a 21st-century Nintendo Switch games console being played on a 32 year old Sony Watchman Pocket CRT television, which was first launched back in 1986 and is equipped with a screen just 3 inches in size.

As you would imagine the hack is quite fiddly to set up and requires a Watchman Pocket TV, HDMI cable, HDMI to AV converter, a VCR, an RF signal booster, and an aerial. As you can see in the image above the Nintendo switches Joy-Con controllers have also been attached to each side of the pocket size television using zipper ties to make gaming that little bit easier.

Rather than connecting the Nintendo Switch games console directly to the pocket TV, the Switch is connected to a VCR and RF antenna which then broadcasts the signal to the TV. Vince has tested a number of Switch games including Zelda: Breath of the Wild, Metal Slug, and Mario Kart. Which even though are played in black-and-white run pretty smoothly considering the setup and the process of getting the image to the pocket TV.