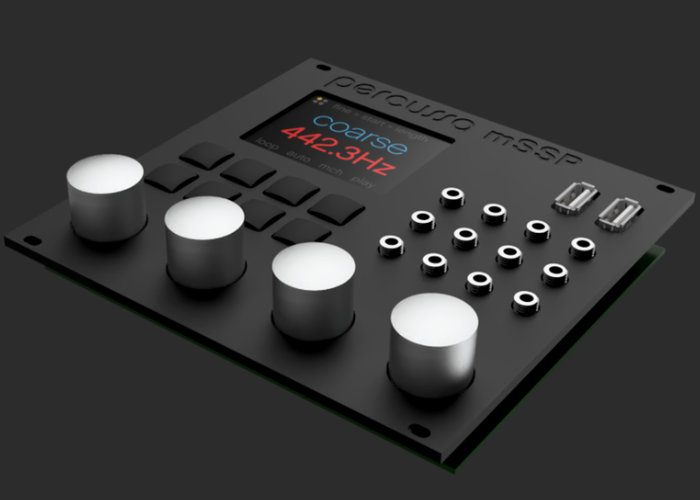 Equipped with a quad core Cortex A171.8GHz processor combined with high end AKM audio converters offering 8 in / 4 out with up to 192kHz sample rate and 32-bit resolution, the mSSP is now available to back with early bird pledges available from $499 or roughly £389 with worldwide shipping expected to take place sometime around June 2019.

Preloaded with 50 modular synthesis patches covering a wide range of synthesis techniques and audio processing methods (half of the patches are chosen by Percussa with the other half to be voted on by backers)
Custom DSP software with more than 25 built-in synth modules such as wavetable oscillators, granulars, samplers, filters and effects
Patches can use combinations of many fundamental DSP modules allowing multichannel and multivoice architectures
Supports loading your own WAV files into patch modules via USB flash drives (e.g. load your own samples in the wavetable oscillators, granular processors, samplers, etc)
Modify, store and recall patch module parameters as presets (limited only by size of the USB stick)
Storage and recall of presets and patches with the press of a button
100+ pre-recorded samples / wavetables with royalty free license for (m)SSP users
Supports loading synthesis patches created on the SSP by Percussa or the SSP community

For full specifications and a complete list of all available pledge options jump over to the official Kickstarter crowdfunding campaign page by following the link below.