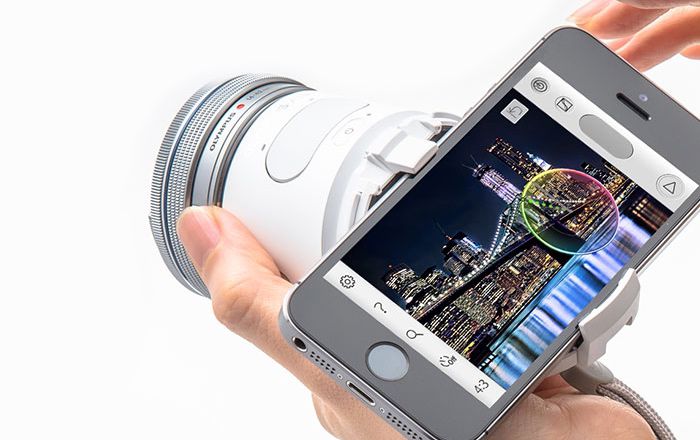 Olympus has today launched their new smartphone and tablet camera lens in the US and Canada in the form of the new Olympus Air A01 that offers the same 16-megapixel sensor and TruePic VII processing engine as that included in the Olympus OM-D E-M10.

The Olympus Air A01 is priced at $300 the first camera lens from Olympus will be available to purchase later this month throughout the US.

The Air A01 has been designed to pair with your smartphone or tablet using Bluetooth technology and includes a 10fps burst mode and silent 1/16000S silent shutter. Other features include F.A.S.T. 81-point Touch Autofocus as well as the ability to customise function buttons enabling you to set the A01 exactly how you like to shoot.

The OLYMPUS AIR is a camera with new concept that provides intuitive controls for shooting, image manipulation, and uploads to social networking services through a linked smartphone. The popularity of posting to social networking services and other uses has increased the frequency of capturing photos to previously incomparable levels, thereby increasing the number of users who feel that photos are an intimate part of their lives.

On the other hand, rather than just having photos as a simple way to remember events, the demand for high-quality photos, in other words, interchangeable lens camera quality, is also increasing. The OLYMPUS AIR was developed to meet the needs of this type of user, and provide an enhanced shooting experience and degree of freedom in the new concept “AIR”.

To capture creative photos on traditional cameras, specialized shooting knowledge and complex camera settings were necessary. However, with the OLYMPUS AIR A01, those difficult settings are done away with by smartphone apps and smartphone controls that make it easy to capture exactly the kind of shot you have in mind.

Unfortunately Olympus has not released any details on worldwide availability as yet but as soon as more information becomes available we will keep you updated as always. For more information on the new Olympus Air A01 jump over to the official website for details via the link below.