A different kind of umbrella is on the way!Named as Nubrella, the unique umbrella resembles a bubble wrapped around the user’s head and shoulders. It works by strapping on a shoulder support and extending a canopy around the head. 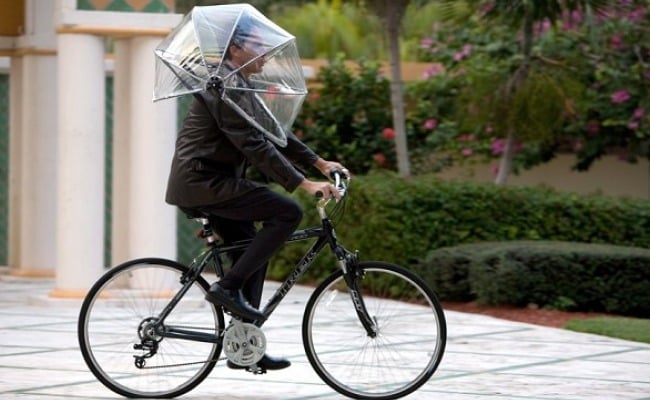 It comes as, after an unexpected showers when Britons endured a washout Easter weekend. Britain’s seaside resorts, last year crowded with visitors as temperatures climbed higher than Spain and Greece, presented a not so nice picture with just the odd hardy dog walker braving the moist conditions.

This gave way to the inventor Alan Kaufman, from Florida the idea of such necessity. “The major advantage is the wearer doesn’t have to carry anything when not in use as it goes behind the head like a hood. The umbrella was long overdue for some innovation, now people can ride their bikes and work outdoors completely hands free while staying protected”; Kaufman stated.

Forecasters saw the soggy weather is set to continue with showers predicted for the rest of the week. Hence, plenty of people could have done with this new hands-free brolly. Designed to resist winds up to 50 mph, the makers hope that Nubrella will become a sales hit.

The Nubrella weighs over 1 kg and costs £40. It also comes in either black or see-through style.