We’ve quite a late about rumors saying that Nokia is working on an Android-based handset, dubbed as Nokia Normandy by the rumor mill. It’s existence is also confirmed by none other than @evleaks who said that it’s in works, and news about its “death are greatly exaggerated.”

Now, to add more twist to all the rumors, an alleged handset with a model number Nokia A110 appeared on AnTuTu benchmarks with Android 4.4.1 running on top of it, and yes, we’re assuming it’s the Nokia Normandy. 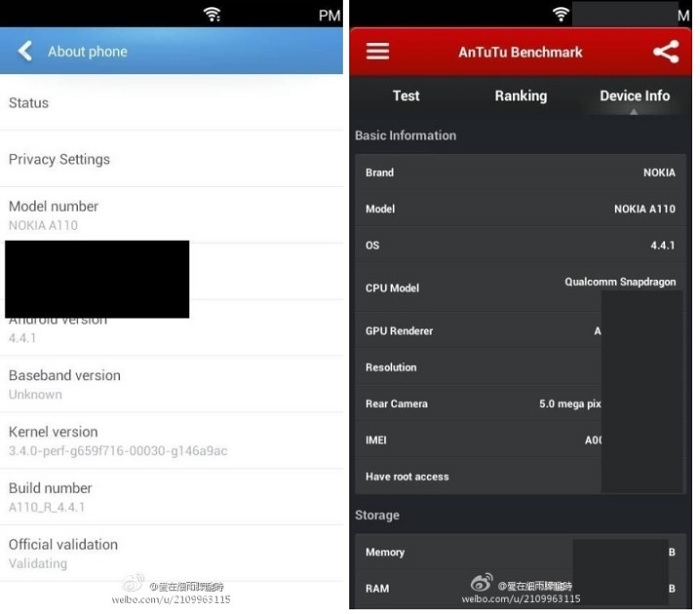 Nokia Normandy has appeared on the internet several times in the past, and most of the times, @evleaks was the one who share with us the glimpses of the alleged handset.

According to the AnTuTu benchmark screenshot above, it seems the device is running Android 4.4.1 KitKat, Qualcomm Snapdragon processor, 854 x 480 pixelsy resolution and a 5MP camera. Rest of the specifications are grayed out, obviously due to privacy concerns.

It appears to be a mid-range handset, and based on earlier rumors, it’s expected to come with dual-SIM support which is quite popular in emerging markets like China and India.

Anyway, let’s take this with a pinch of salt as we’re not sure if this handset will see the daylight or not as Microsoft will complete the acquisition of Nokia’s Devices and Services division in the coming months. But, if it does, it’s going to be the MWC 2014, according to rumors.