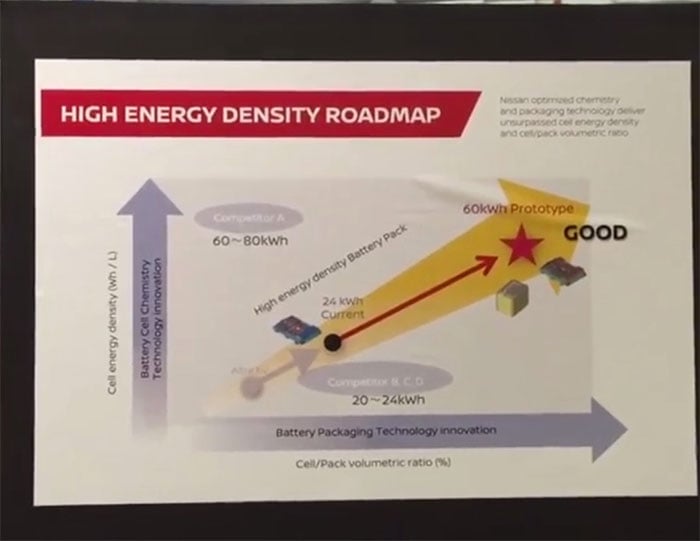 Nissan was one of the first major manufacturers to find some success with its Leaf EV. The car has long been one of the best selling pure electric cars in the market. Nissan knows that the Tesla Model 3 will put some serious strain on Leaf sales and to combat that threat, it is set to launch a version of the Leaf with a larger battery pack. The tip on the launch of a 60 kWh battery pack inside the Leaf comes from a leaked roadmap that is reportedly from a Nissan presentation.

The roadmap shows that a 60kWh battery pack EV is in development. With the Leaf, being Nissan’s EV the assumption is that the Leaf will come with a larger battery pack, presumably somewhere in the 2018 year model timeframe. Nissan uses a 60 kWh battery in its IDS Concept. Currently the Leaf has a 30 kWh battery pack good for 107 miles of driving per charge.

By doubling that capacity to 60 kWh, the Leaf should be good for around 214 miles on a charge. Nissan needs more than a larger battery to continue competing with Tesla and other makers. Nissan always seems to think its products deserve a premium, and many buyers simply don’t agree.