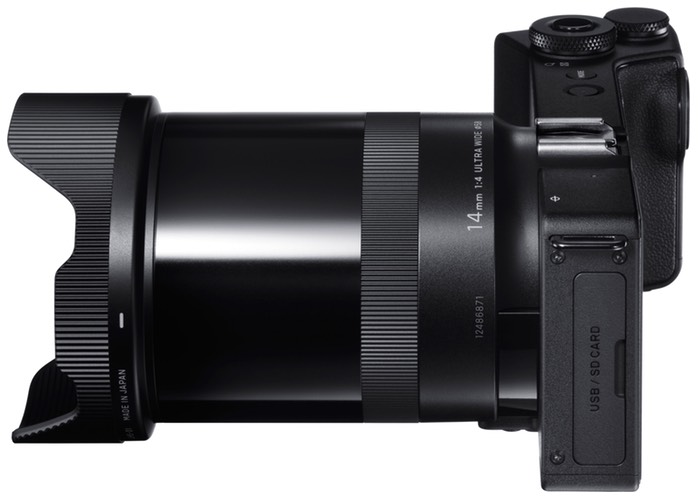 Sigma has this week unveiled a new addition to their range of wide angle compact cameras with the launch of the dp0 Quattro that is fitted with a fixed wide-angle 14mm F4 lens.

Other features include 4 FLD, 2 SLD and 2 Aspheric glass elements to reduces chromatic aberration and distortion together with a new Foveon Quattro Sensor.

Unfortunately no information on pricing or worldwide availability has been released as yet by Sigma for the dp0 Quattro compact digital camera, but as soon as information comes to light we will keep you updated as always. Sigma explains a little more :

“Redesigned in every aspect, including the sensor, engine, lens and body, the dp Quattro Compact Camera series embodies Sigma’s philosophy of creating cameras that produce works of art. The dp0 is the fourth camera in the new Quattro series to be released, with the dp1, dp2 currently available and the dp3 Quattro to follow.

The dp0 is stocked with a fixed and newly designed 14mm F4 wide-angle lens designed specifically and lined up perfectly with its new Foveon X3 Quattro sensor to create exceptional images. Renowned for unmatched image quality, the Foveon image sensor is Sigma’s proprietary technology which captures transmitted light in a vertical 3 layer sensor with dedicated layers to Red, Green and Blue.

The only one of its kind, the Foveon sensor produces full bodied images, rich in tone, gradation, and texture with a 3D feel to them. The new Foveon X3 Quattro offers an even higher level of image purity with an increase in resolution to the previous Foveon sensor, sure to bring about new experiences in your photography.

For more information on the new Sigma dp0 Quattro jump over to the Sigma website for details via the link below.