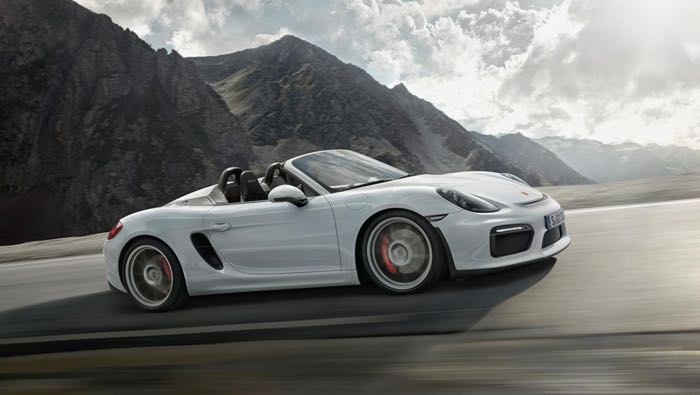 Porsche has announced a new version of their Boxster at the New York International Motor Show, the Porsche Boxster Spyder.

The new Porsche Boxster Spyder comes with a 3.8 litre flat six engine that has 375 HP, it also comes with a manual transmission and can travel from 0 to 60 MPH in just 4.3 seconds and it has a top speed of 180 MPH.

The distinctive design of the Boxster Spyder includes stylistic elements that recall the legendary sports and race cars from Porsche. For example, as a tribute to the 718 Spyder from the 1960s, the new Boxster Spyder has two prominent streamlined bulges that extend down along the long rear lid behind the headrests. The partially manually operated, lightweight top is suitable for everyday use and brings to mind roadsters from the past, while the fins that stretch back to the rear lend the vehicle’s silhouette its characteristic design. The front and rear end of the model were taken from the Cayman GT4.

You can find out more details about the Porsche Boxster Spyder at the link below, this new Boxster will launch later this year.