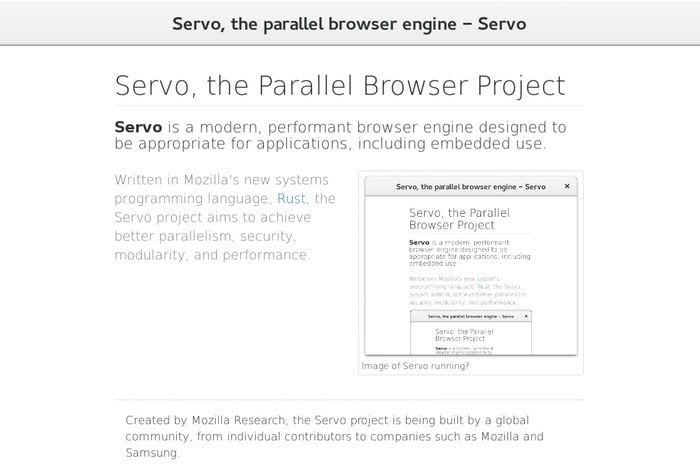 Mozilla has this week announced that its new Mozilla Servo browser which has been built from the ground up using Mozilla’s new systems programming language, Rust. To provide users with a super fast browser will be available during June 2016 for testing although it won’t be ready for rollout as an everyday browser for quite some time yet.

The Mozilla Servo browser has been designed to support 64bit Linux, 64bit OSX, Android, and Gonk (Firefox OS) and has been created by Mozilla Research and being built by a global community.

The community behind the development of the Servo project includes individual contributors as well as companies such as Samsung and has been built with Cargo, the Rust package manager. Mozilla explains more :

The Servo Project encourages contributions from experienced and new developers alike. Look at the links at the bottom of the page to learn more and join hundreds of contributors worldwide working to help make Servo even better.

Contributions to Servo or its dependencies should be made in the form of GitHub pull requests. Each pull request will be reviewed by a core contributor (someone with permission to land patches) and either landed in the main tree or given feedback for changes that would be required. All contributions should follow this format, even those from core contributors.

Should you wish to work on an issue, please claim it first by commenting on the GitHub issue that you want to work on it. This is to prevent duplicated efforts from contributors on the same issue.