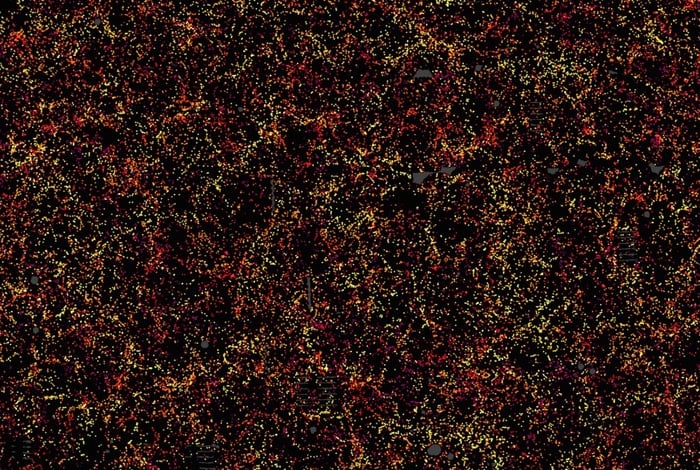 A new 3D map of the universe has been released this week by researchers, showing data recorded over the past decade to measure and log the universe’s expansion over time.

A team of scientists comprising of hundreds from the Baryon Oscillation Spectroscopic Survey (BOSS). A program from the Sloan Digital Sky Survey III, that measures the expansion of the universe over time, have pooled their resources and data to create the new 3D universe map which includes over 1.2 million galaxies.

We have spent a decade collecting measurements of 1.2 million galaxies over one quarter of the sky to map out the structure of the Universe over a volume of 650 cubic billion light years. This map has allowed us to make the best measurements yet of the effects of dark energy in the expansion of the Universe. We are making our results and map available to the world.

Ariel Sanchez of the Max-Planck Institute of Extraterrestrial Physics explains :

Measuring the acoustic scale across cosmic history gives a direct ruler with which to measure the Universe’s expansion rate. With BOSS, we have traced the BAO’s subtle imprint on the distribution of galaxies spanning a range of time from 2 to 7 billion years ago.

For more information on the new 3D map of the Universe jump over to the SDSS website for details by following the link below.