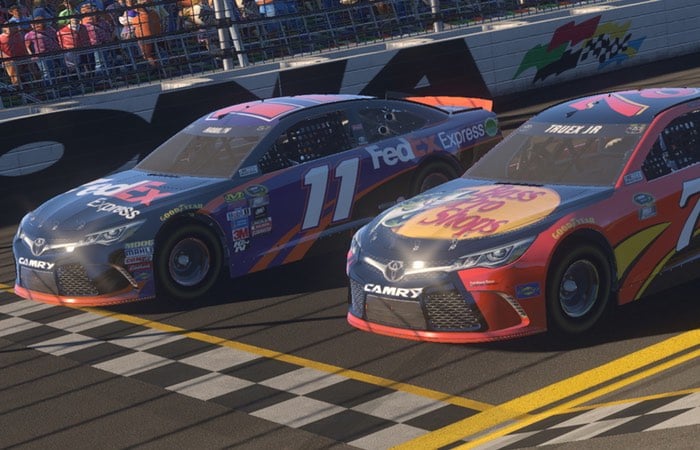 Sean Wilson Executive Producer at Dusenberry Martin Racing has taken to the official PlayStation blog this week to reveal more details about the upcoming NASCAR Heat Evolution game, that will include online multiplayer and the variety of different game modes to test your driving skills to the max.

Watch the official and latest NASCAR Heat Evolution gameplay trailer below to whet your appetite and learn more about what you can expect from the racing game that offers players extensive car tuning options as well as adaptive artificial intelligence to race against  that will adjust to your skill level.

The biggest thing we wanted to do to separate NASCAR Heat Evolution from any NASCAR title you’ve played before is in online competitive multiplayer. As the first official NASCAR game on PS4, we recognized we had the power to do things never before possible in a NASCAR game. So we committed to giving players the real deal: a full field of 40 racers in online multiplayer — 40 human players all going for the checkered flag in the same race.

In previous NASCAR console games, each multiplayer game was hosted by a specific user, and that kind of peer-to-peer system could result in a number of issues — the host could leave, or have a poor connection, and that could negatively alter the entire race. We knew that system wouldn’t fly if we wanted to put 40 players together in NASCAR Heat Evolution. We built a new system where each online game’s data is hosted by a server. All race data comes from that server, so the entire race experience is no longer tied to any one player.

There will be three different online lobbies available: No Rules, Normal, and Hosted.

– No Rules: If you’re a beginner just looking to learn, bump, and crash (or you just want to bump and crash), the No Rules lobby is for you. This is a great place to practice, try things out, or just have a good time with friends.

– Normal: For players who want to test their skills but are still looking for a good, clean, and friendly race.

– Hosted: This lobby is for people who are more serious about racing. Race hosts will have the option to decide which level of player can join the race session. For example, if the host only wants racers level 5 or higher, he or she can set that parameter when creating the session. In addition, hosts have the right to boot players from their game.