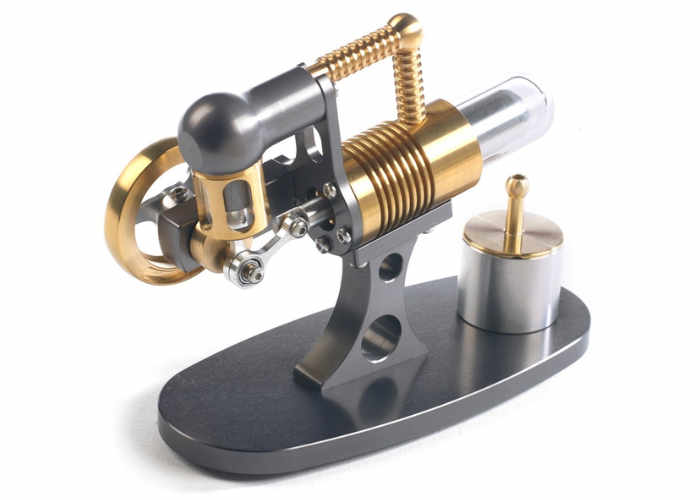 Kontax Engineering have once again taken to Kickstarter to raise funds for their new Nano Fin Stirling Engine which is available for delivery before the holiday season with pledges starting from £75. The latest addition to the Stirling Engine range created by Kontax includes more refinements to the design as well as the a small methylated spirits burner which powers the piston and engine. Watch the demonstration video below to learn more about this latest version.

Following on from the success of our previous kickstarter campaigns we have decide to launch our latest engine once again on Kickstarter. The engine will arrive in time for Christmas 2017. This is now our third hot air engine on Kickstarter! We call it the Nano Fin Engine. It is gamma type Stirling engine with a tube connecting the displacer cylinder to the power cylinder. The tube connection is as functional as it is visually appealing. We are well known for our rapid delivery of our kickstarter projects. Once again the engine is fully prototyped and tested. Our in-house CNC machines are ready to go!

Engine comes assembled and is supplied with a burner and wick. The only things you will need is fuel and something to light the wick with. The engine is designed to run from methylated spirits (Denatured alcohol) which is widely available around the world. You just need to push the wick into the burner top, leaving it to protrude about 4mm (1/6 inch). The rest of the wick can remain curled up in the base of the burner. You then fill the burner with no more than ¾ full. Half full will last a long time running the engine. Put the lid of the burner on and place the burner into the base. It fits snuggly.