On the weekend we saw some leaked press shots of the new Motorola Moto X, and now we have some more details on the handset, including some more specifications, photos, and benchmarks of the device.

It looks like the Motorola Moto X will be powered by a dual core Qualcomm Snapdragon S4 Pro processor with a clock speed of 1.7GHz, it will also feature 2GB of RAM and an Adreno 320 GPU. 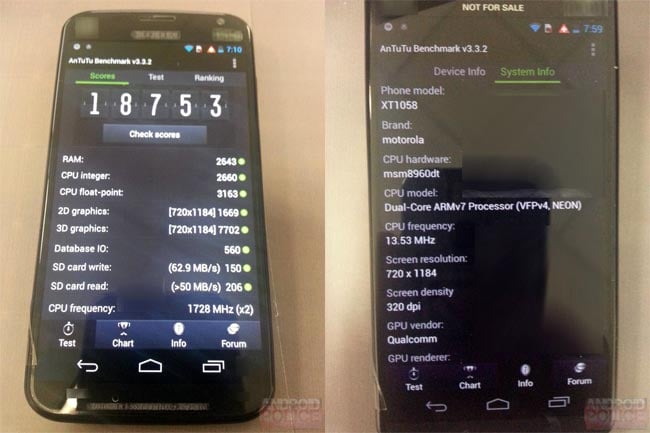 Other specification on the Moto X will include a 4.5 inch display with a resolution of 1280 x 720 pixels, plus front and rear facing cameras, with a 2.1 megapixel camera up front.

The rear camera on the Motorola Moto X will apparently be a 10.5 megapixel camera, and it will come with 16GB of built in storage, NFC and a 2,200 mAh battery.

The device pictured is apparently a test unit which was running Android 4.2.2 Jelly Bean, although the handset is expected to launch with Android 4.3 Jelly Bean.