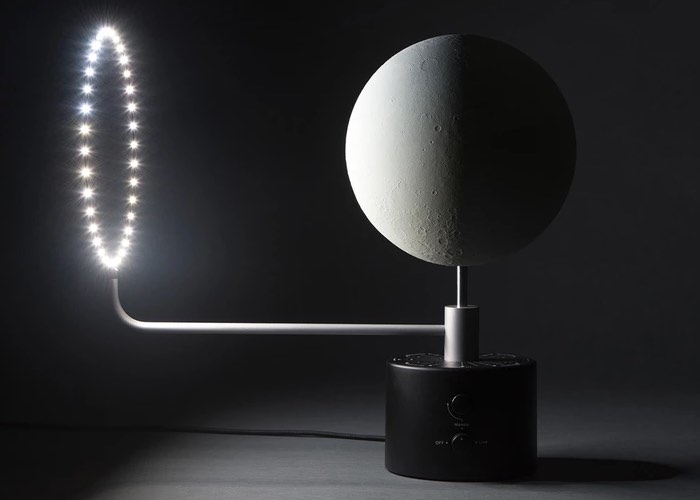 Check out the video below to learn more about this lunar globe, its inspiration, design and features that has been created using NASA’s Lunar Reconnaissance Orbiter topographic data combined with electronic and mechanical engineering.

The creators of the MOON lunar globe explain a little more about its creation :

MOON is the most accurate lunar globe, using NASA’s Lunar Reconnaissance Orbiter topographic data combined with electronic and mechanical engineering alongside careful craftsmanship in mold making. MOON is unlike traditional lunar globes that uses 2D photographs or illustrations of the Moon.

1. it is a truly accurate 1/20 million replica of the Moon featuring all the craters, elevation and ridges in accurate 3D.

2. it has a ring of LED lights that revolves around the globe, constantly illuminating the correct face of the moon and recreating the lunar phases as seen from Earth.

The combination of the 3D terrain with a light source is what makes it unique. By projecting the light onto the Moon, all the craters, ridges and elevations are brought into relief by their shadows. This recreates the lunar features as we see them from Earth.

For more information on the new MOON lunar globe jump over to the Kickstarter website for details following the link below.