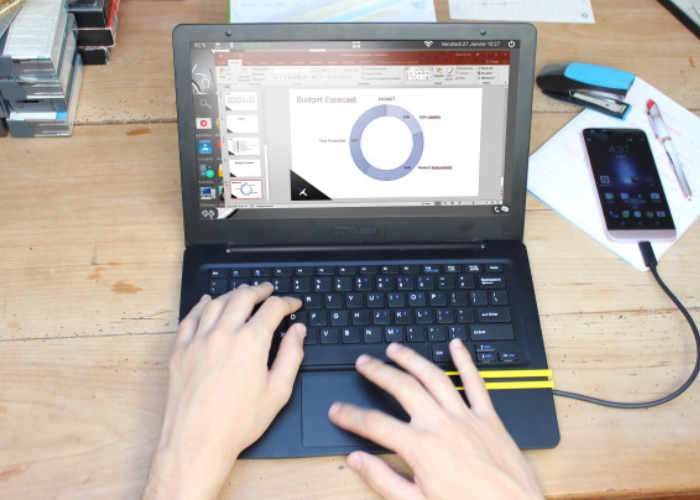 Anyone looking to utilise the power of their pocket smartphone as a laptop computer may be interested in a new piece of hardware called Mirabook which has been developed by a team based in Lyon France called Mirateam.

The Mirabook smartphone laptop has been designed to enable you to connect your smartphone to a larger screen using the power inside your pocket device is the processing engine while providing a full-sized QWERTY keyboard and larger screen providing more comfort during those longer sessions.

In a world where mobile has triumphed, Miraxess launches The Mirabook, a true extension to give the smartphone all the capacities of a laptop. A large full HD Display, a keyboard, a touchpad, extra storage and a high capacity battery that instantly creates the ultimate laptop – of which you already own half.

As Consumers increasingly depend on their Smartphone to organize their personal and professional lives, it is becoming evident that the traditional computer has been replaced by the Smartphone as the main servant of our digital needs. The PC market and worldwide deliveries keep declining: -5.7% in the 3rd quarter of 2016 and -3.3% for EMEA. This can be explained among others by the emerging markets where People choose Smartphones over PCs.

The Mirabook Extension fits into this natural movement that makes the Smartphone the universal engine of our activities. Miraxess reinvents the laptop and focuses on a small handheld computer, the Smartphone. Since its launch, the smartphone has been integrating more and more features. The Smartphone is nowadays a real computer with a capacity that truly matches one of a conventional PC. For instance, did you know that the Samsung Galaxy S8 is more powerful than a Macbook air.

For more information on the new Mirabook smartphone lapto jump over to the Indiegogo website for details by following the link below.