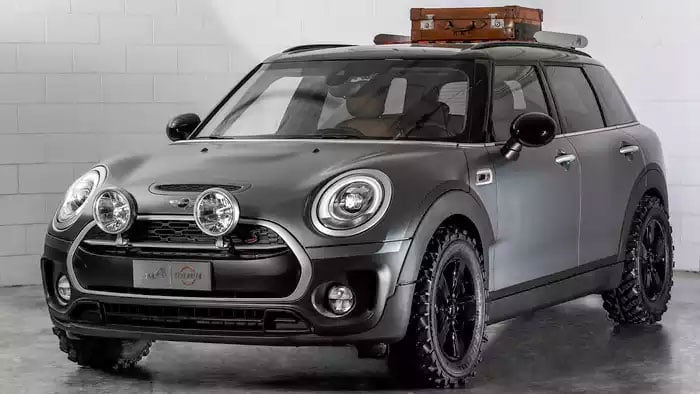 Mini has rolled out a very cool concept car called the All4 Scrambler and it looks like a Cooper rolled in with a bit of dual sport motorcycle. The car is essentially a Clubman with a raised suspension and knobby tires that doesn’t appear to be too complicated to put into production. The idea is based on that of scrambler motorcycles that can pull duty on-road and off.

The car gets some slick spotlights on the front for lighting up the off-road trails. It also has a roof rack that is very small, but could hold a few things that you might not want to carry inside the car. Inside the car as brown leather and Alcantara material for seats and other parts mixed with some black for an appealing two-tone look.

The car was unveiled at the Salone dell’Auto Turino that is open until June 12. There is no indication that the concept might be built. That said, perhaps the raised suspension, lights, and roof rack will be offered as aftermarket accessories. This is certainly the burliest and roughest Mini we have seen and it makes the Clubman look much more manly and ready to crush dirt roads.