Microsoft has just released information of its new muscle control interface technology which allows you to control devices using your muscles. Which opens up a whole new dimension in possible game and real world controllers for devices.

The new technology uses “electromyography”, or EMG which records the electrical activity of muscles and translate those signals into instructions. Check out the video after the jump. 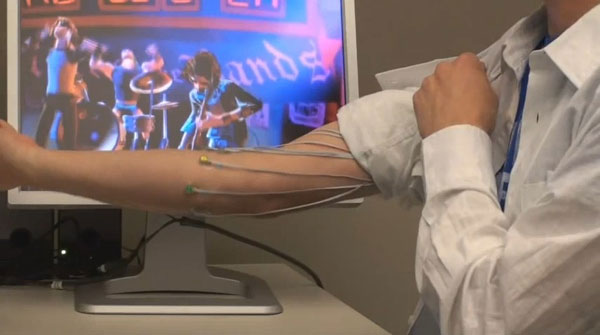 As computing and displays begin to integrate more seamlessly into our environment and are used in situations where the user is not always focused on the computing task, it is important to consider mechanisms for acquiring human input that may not necessarily require direct manipulation of a physical implement.

We explore the feasibility of muscle-computer input: an interaction methodology that directly senses and decodes human muscular activity rather than relying on physical device actuation or user actions that are externally visible or audible.