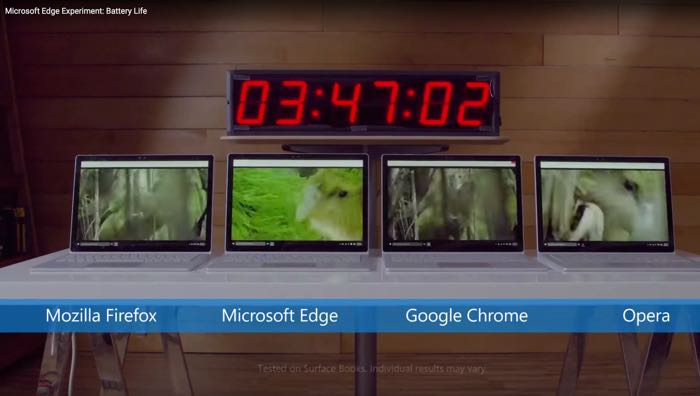 Microsoft has released a video testing the Microsoft Edge browser next to Google’s Chrome, Opera and Mozilla Firefox.

The video below shows four identical notebooks being tested side by side, each using a different browser.

To understand the impact, we compared today’s leading browsers across three independent dimensions. First, we measured their power consumption in a controlled lab environment. Second, we examined the real-world energy telemetry from millions of Windows 10 devices. Finally, we recorded time-lapse videos of each browser performing the same tasks until the battery dies. Microsoft Edge wins out in every case, which translates to longer battery life for you.

As we can see from the video the Microsoft Edge browser latest the longest, with Opera in second place, then followed by Firefox and Finally Google’s Chrome.

What is interesting is that the Edge browser from Microsoft managed to last a total of over three hours longer than Google’s Chrome browser.