Microsoft has published a new infographic celebrating the number of people that are playing on the new Xbox One console. Keep in mind that the Xbox One has only been available for a few weeks so far. The infographic asks gamers how much of the statistics they are responsible for. The image shows that since launch there have been over 3 billion zombies killed in Dead Rising 3. 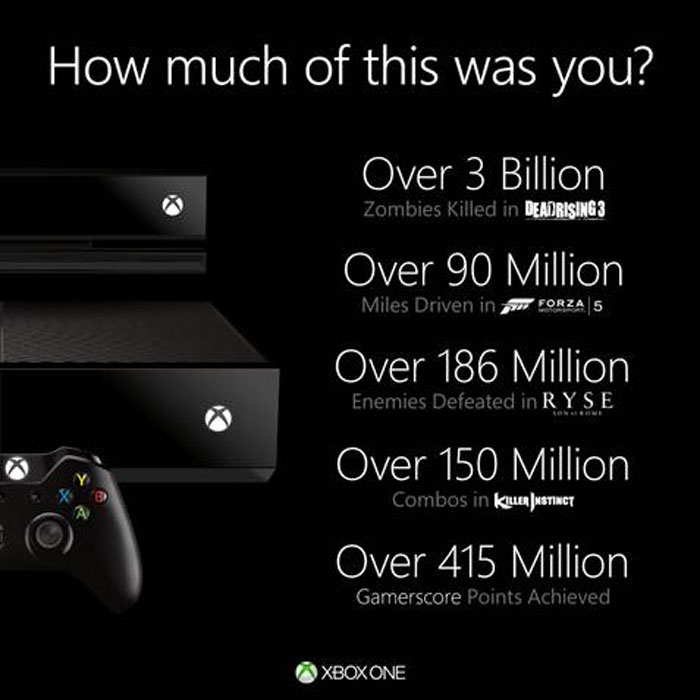 The graphic lists over 90 million miles driven in Forza 5 and over 186 million enemies defeated in RYSE. The infographic also shows that over 150 million combos have been used in Killer instinct and over 415 million Gamerscore points have been scored.

One interesting statistic that is left out of the graphic is that there have been over 50 million hours speni in games and on entertainment on the Xbox One since it launched. “We are humbled and gratified by the overwhelming response from our fans to the launch of Xbox One. Eleven days in we are seeing record breaking sales and are selling every Xbox One we can make. Demand is far exceeding supply in the 13 countries we’ve launched and we are sold out at retailers around the world. We are seeing incredible usage from our engaged fans who have purchased Xbox One with more than 50 million hours spent on Xbox One games and entertainment,” said Yusuf Mehdi, Corporate Vice President of Strategy and Marketing, Xbox.