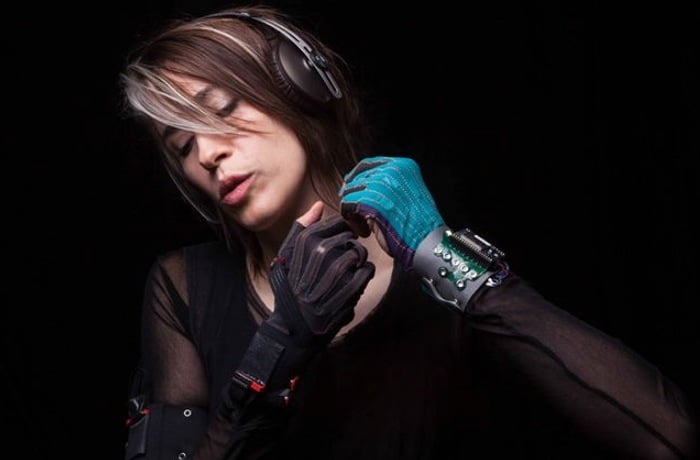 Musicians looking for a different way to create music might be interested in a new instrument that has been created in the form of the Mi.Mu Glove for Music.

The Mi.Mu Glove for Music was recently launched on Kickstarter but unfortunately didn’t raise enough pledges to meet its £200,000 development goal. However it did raise over £130,000 in the process and is currently developing a website to launch its product using funds from another source.

The very unique musical instrument is the brainchild of Imogen Heap who has created the glove to provide state-of-the-art wearable technology that allows musicians to control sounds using just their hands. Providing a very unique and new way to create music, watch the video below to learn more about the Mi.Mu Glove and see it in action.

“Imagine, for example, that instead of turning up a fader in order to bring in a sound or add reverb, you could be raising your arms to achieve the same effect. Or to move a sound around the room, you could simply point where you want it to be.  Not only is this much more intuitive, it is also more enjoyable to watch, making it easier for your audience to connect with what you’re doing.

Our aim is to break down the barriers between musicians and machines, and between performers and audiences. Every musician and/or performer will know the bane of their existence is to have to carry, or worse, ship vast amounts of technological equipment to whatever destination they are playing. The gloves are a compact, lightweight and self-contained system requiring little more than a laptop to function fully. “

Even tho the project was unsuccessful pogrom Kickstarter crowd funding website the development team has found a way to move forwards by working with smaller groups, starting with our Collaborators. for more information jump over to the official Mi.Mu Glove website to enquiry about when the music glove will be available.