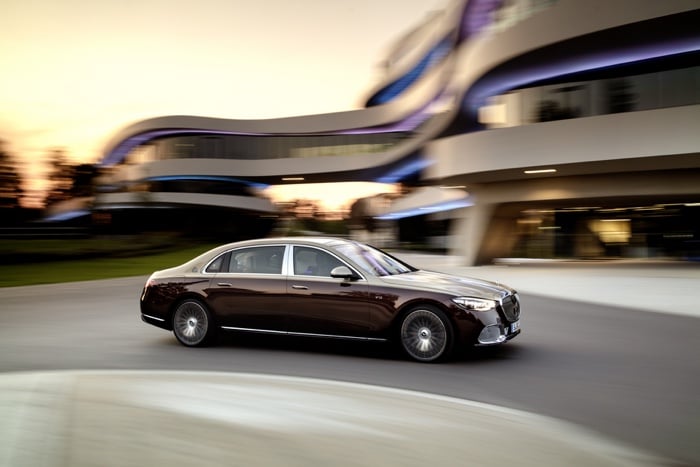 Mercedes Benz have announced their new Mercedes Maybach S 680 4MATIC Sedan, the car will fo on sale in the USA in 2022.

The new Mercedes Maybach S 680 4MATIC Sedan is powered by a 6.0 litre V12 engine that produces 621 horsepower and comes with 738 lb-ft of torque.

The car feature a 0 to 60 mph time of just 4.4 seconds and it comes with the latest high end Mercedes Benz technology.

Equipped with a handcrafted 6.0-liter V12 biturbo engine, the S 680 4MATIC is the most powerful model in the Mercedes-Maybach lineup, capable of producing 621 hp and 738 lb-ft of torque and rocketing the luxury sedan from zero to 60 mph in just 4.4 seconds. The new-generation S 680 now includes the 4MATIC all-wheel drive system for the first time. Delivering 31% torque distribution to the front axle and 69% to the rear axle, the 4MATIC system offers the best possible traction and driving stability while delivering the highest level of ride comfort and driving dynamics. The further-developed front axle differential has been optimized in terms of its weight and friction values. Further refinements of the luxury sedan include active road noise compensation, which helps make the already serene interior environment of the Mercedes-Maybach S-Class even quieter. Similar to headphones with noise suppression, the system reduces unwanted low-frequency noises using counter-phased sound waves. Active road noise compensation is a function of the new Burmester® High-End 4D Surround Sound System.

You can find out more details about the Maybach S 680 4MATIC Sedan at the link below, as yet there are no details on pricing.