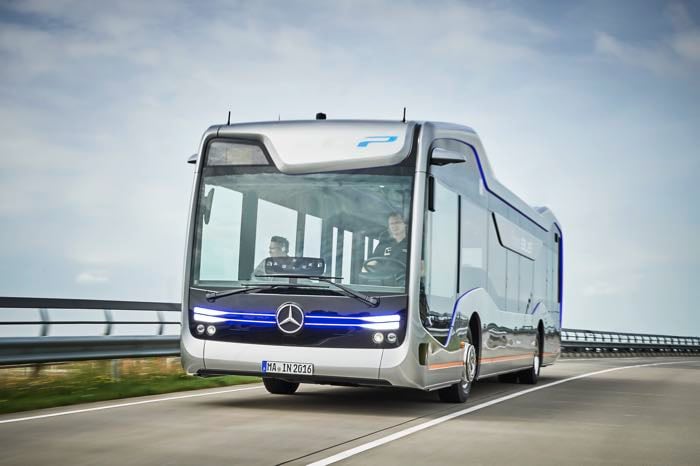 Mercedes has shown off their new self driving bus, called the Mercedes Future Bus. This new autonomous bus has made its first journey on a route which covered almost 20km.

The technology of the CityPilot in the Mercedes-Benz Future Bus is based on that of the autonomously driving Mercedes-Benz Actros truck with Highway Pilot presented two years ago. It has however undergone substantial further development specifically for use in a city bus, with numerous added functions. The CityPilot is able to recognise traffic lights, communicate with them and safely negotiate junctions controlled by them. It can also recognise obstacles, especially pedestrians on the road, and brake autonomously. It approaches bus stops automatically, where it opens and closes its doors. And not least, it is able to drive through tunnels.

Just under a dozen cameras scan the road and surroundings, while long and short-range radar systems constantly monitor the route ahead. There is also a GPS system. Thanks to data fusion, all the data received create an extremely precise picture and allow the bus to be positioned to within centimetres. This already works in practice, as demonstrated by the world premiere of the CityPilot on an exacting route covering almost 20 km, with a number of tight bends, tunnels, numerous bus stops and involving high speeds for a city bus.

You can find out more details about the Mercedes Future Bus over at Mercedes Benz at the link below.