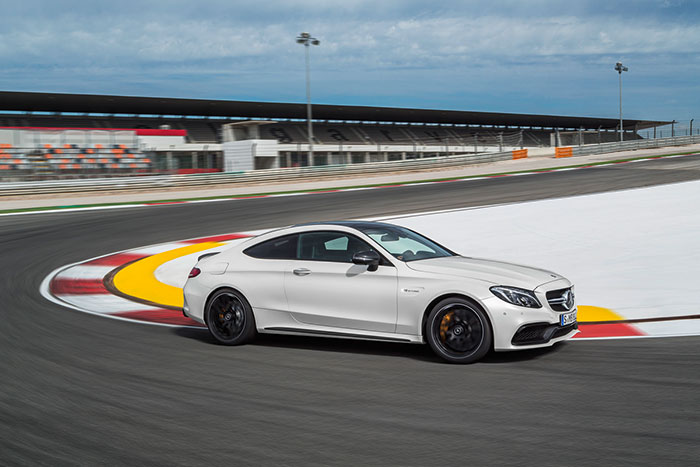 After we caught a glimpse at the Mercedes AMG C63 Coupe on video a few times, the car has gone official with MB unveiling all the details on the car. There will be two versions of the Mercedes C63 AMG Coupe with the standard C63 AMG coupe packing a bi-turbo V8 engine with 469hp and 479 lb-ft of torque. That C63 AMG standard version will rocket to 60mph from a standstill in 3.9 seconds.

Those wanting the most power possible from their new AMG C63, can opt for the AMG C63 S, which is an in house project by Affalterbach. That S version packs the same bi-turbo V8 engine but power is bumped to 503hp and 516 lb-ft of torque. That extra power pushes the car from 0 to 60 mph in 3.8 seconds.

Top speed for the standard C63 is 155mph with the S version reaching 180mph. The car also features a 7-speed AMG Speedshift MCT transmission that can upshift and downshift faster than previous models. The car has an integrated rear diffuser to help aerodynamics and features AMG Ride Control suspension that is electronically controllable and AMG Dynamic Select Transmission modes. The new feature we still don’t know is the price.