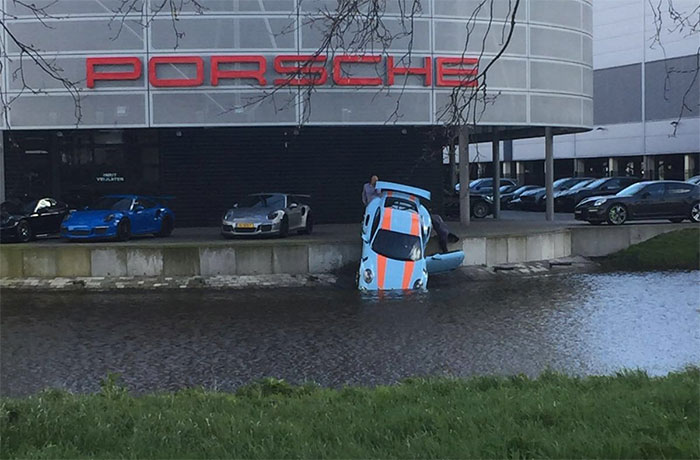 One look at this picture is enough to make any car guy or gal cringe. The dead sexy Porsche you see there with its nose in the water is one of the rare 911 GT3 RS models that sold out quickly. This particular example was at a Porsche dealership and a mechanic made a serious mistake with the car.

The result of that mistake was a drive off a tall curb and the front end of the car ended up in the water. You can be the level of sphincter pucker the mechanic felt when he drove the 248,000 EUR car off the curb will leave a cramp lasting for some time. Since the car doesn’t have the engine in the front and not much of the car was in the water, the dealership says damage is minor and the car will be fixed and sold as planned.

I can say that this 911 GT3 has fantastic colors that remind of the famous Gulf racing livery. If you are unaware, the 911 GT3 RS has a 500hp 4.0L six and has the Porsche PDK gearbox. It won’t take long to get out of hand with the ability to reach 60mph in 3.3 seconds. We have no idea what sort of mistake led to the dunking. Perhaps the mechanic thought he had the car in reverse.