Spider man fans are sure to be please to learn that Marvel has this week announced that a new Spider-Verse Event will be arriving Novermber 2014 that will be a Spidey story of unprecedented and epic proportions and include every Spider-Man…ever.

The Spider-Verse Event will include every incarnation of Spider-Man in comic book history to fight a foe that is killing anyone in spider costume. Marvel released a new graphics to show the scale of the new Spider-Verse Event by artist Gabriele Dell’Otto featuring a large chunk of the main cast. 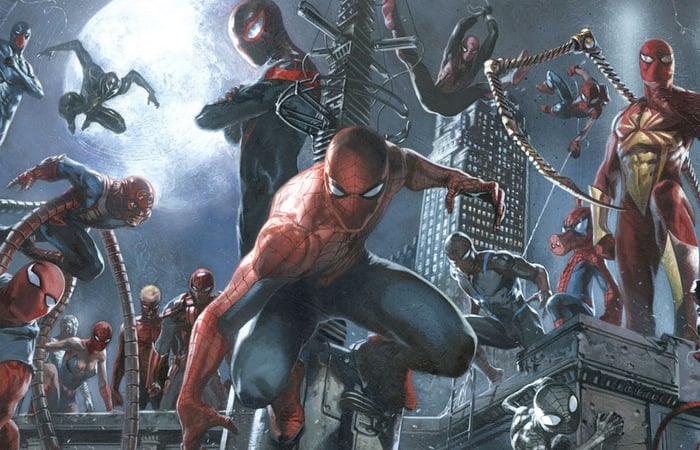 “Kicking off this November in AMAZING SPIDER-MAN #9 (with a special lead-in story on Free Comic Book Day), Slott and Coipel assemble an legion of Spider-Men from every corner of every universe.

Peter Parker, Miguel O’Hara, Miles Morales and many, many more must unite to stop a seemingly insurmountable super-powered foe. Morlun, an incredibly powerful villain has returned with a singular and terrifying goal: exterminate every Spider-Man in every universe! It will take thousands of spider-powered heroes to battle back the greatest threat to this universe or any other!

Fans can see the first hints of this event in April’s AMAZING SPIDER-MAN #1 but will get their first real taste of Spider-Verse in Marvel’s FREE COMIC BOOK DAY GUARDIANS OF THE GALAXY issue this with a special five-page lead-in story available for free at all participating comic shops on May 3. This fall, Spider-Verse unites every Spider-Man in history to drive back the forces of darkness. But will an army of Spiders be enough?”

For more information on the new Spider-Verse Event jump over to the Marvel comics website for details and top view the full size graphics created to promote the event.