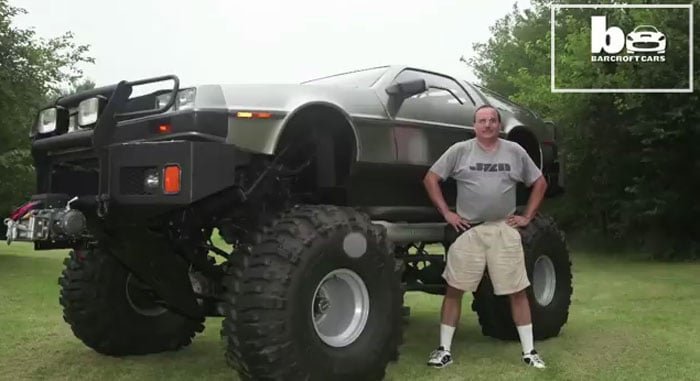 One of the most well known movie cars in all of Hollywood is the stainless steel DeLorean that was turned into a time machine by Doc Brown in Back to the Future. Those stainless steel cars were the stuff of car guy dreams back in the 80s even though the performance under the hood failed to live up to the cool style of the cars.

A man named Rich Weissensel has taken several not quite pristine examples of the DeLorean and turned them into some wild creations. One of the DeLorean’s is now a big monster truck fit for squashing terrorists on your way to 88mph. Rich has also built a hovercraft out of a DeLorean. The strangest of the creations he has made is a stretch DeLorean limo that has three sets of the famous gull wing doors.

Another odd creating is a convertible DeLorean. The coolest part of the DeLorean was always those gull wing doors to me, the convertible really takes away the best part of the car. It also looks rather shoddily built. Apparently, the limo required three DeLorean donor cars to build. The coolest is the obligatory Back to the Future movie car reproduction. Check out the video here to see more details on the cars.