After nine years of top secret toil, Dan Reeves pulled out his homemade airplane from its lair for a test flight. The problem: he had to modify his house so it could be pulled out and readied. Keeping faithful to a straightforward turbo-prop design, Dan dug out a ramp form his basement for the fateful maiden voyage on his airborne ride. If there are more people like Dan (and we know there are), then the idea of a solitary Tony Stark building power armor in a cave isn’t so far fetched after all. 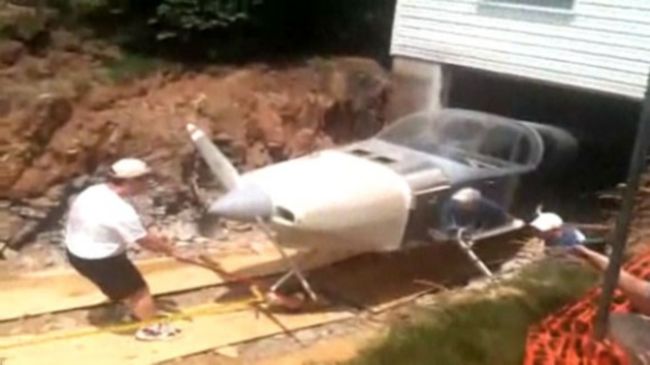 The low quality pic above was captured from a video segue of Dan doing the deed. That is, pulling his precious baby out of the basement.

This should go out to the aspiring flyers out there: Yes you can. It might take almost a decade, but Dan’s got his own plane at last.

We wonder if it’s possible to build a fighter jet in your backyard. Or some spacious basement. Not a real fancy machine, but a simple design along the liens of the Sabre. Hmmm.

Go check the source link for the video.